Note: This page links to Eddie Williams, the major league infielder in the 1980s and 1990s. For other players with the same name, click here. 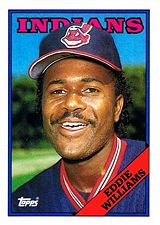 Eddie Williams, a first round draft pick (# 4 overall) in the 1983 amateur draft, was a top prospect for a long time of whom great things were expected. However, he kicked around the majors for ten years without ever playing as many as 100 games in a season. He did, however, have one terrific season in 1994, hitting .331 with a .594 slugging percentage while getting a mere 175 at-bats.

Originally a third baseman, he was a first baseman for the second part of his major league career.