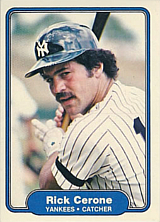 "...Rick Cerone, a tough, street smart ex-Yankee, sprinted out of the dugout. Cerone understood the need for the Mets to show some backbone. He'd played on some of the hard ass Yankees teams of Reggie and Billy and Piniella and Nettles and, in fact, had become a quasi-legend for cutting short a post game lecture from George Steinbrenner following a loss in the '81 playoffs by blurting out '[EFF] you, George' in front of the whole team. Now here he came, racing toward the mound, with both teams in pursuit. Cerone wasn't particularly big or strong, but he was so angry that when Pedro Guerrero stepped in front of him, Cerone bowled him over. He reached Fraser and connected with at least one good punch before disappearing in a sea of players. 'Had to do it,' Cerone would say later. 'Sometimes you just have to do it. We've just lost eleven games, we're finally winning one and some guy is going to throw at our best player? You can't let that happen.'" - Bob Klapsich and John Harper, from The Worst Team Money Can Buy, about a 1991 Mets brawl

Rick Cerone was a journeyman catcher, playing eighteen seasons in the majors with eight different teams. In 1980, the New York Yankees' first full season without the late Thurman Munson, Cerone shone at his brightest.

Cerone won Bronze with the USA in the 1973 Intercontinental Cup and Gold at the 1974 Amateur World Series. He was a first-round pick in the 1975 amateur draft by the Cleveland Indians and came to the majors that year for 7 games. His only time in the minors came at the Triple A level. He was traded to the Toronto Blue Jays before the 1977 season and gradually saw more and more playing time with the Jays. In 1979, he was the team's primary catcher, hitting just .239/.294/.358 in 136 games. On November 1st he was packaged with Tom Underwood and Ted Wilborn to the Yankees, the Blue Jays receiving 1B Chris Chambliss (whom they quickly traded to the Atlanta Braves and 2B Damaso Garcia.

Rick had the unenviable task of filling the large shoes worn by Thurman Munson, as the first new Opening Day catcher for the Yankees in a decade. Where others may have faltered, Rick had his best year, hitting .277/.321/.432 with 14 home runs, 30 doubles and 85 RBI on a Yankee team that won 103 games. He was 4-for-12 with a home run in the 1980 ALCS loss to the Kansas City Royals, then finished 7th in the MVP voting. His seemed to be an elevator very much on the way up. But in the following four seasons with the Yankees, he never hit over .244 or played more than 89 games. He was the Yankees' starter during the 1981 postseason, hitting .333 with a homer in the ALDS, but falling to .100 in the ALCS and .190 in the World Series, although he did hit another homer. He suffered a multitude of injuries, shared time with Butch Wynegar (among others), and was finally traded to the Atlanta Braves in December 1984.

Cerone spent the rest of his career bouncing around. He hit .216/.288/.280 in Atlanta, then moved to the Milwaukee Brewers in a swap for future Hall of Famer Ted Simmons. A favorite of George Steinbrenner, he made two returns to the Yankees, taking the mound for two scoreless appearances (2 innings) in 1987, his last 100-game season. He caddied for Rich Gedman in Boston from 1988 to 1989 and ventured to the other New York team, the New York Mets, in 1991, batting .273 in 90 games while splitting time with Charlie O'Brien. He finished his career with the Montreal Expos in 1992.

After baseball, Rick spent some time doing Yankee and Baltimore Orioles games on TV. In 1998, he founded the independent Newark Bears club, selling them in 2003.

Cerone recorded a single, "A Long Run Home", in 1981. All royalties were donated to the Italian earthquake victims fund.