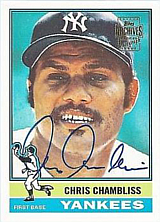 "If you're not having fun in baseball, you miss the point of everything." - Chris Chambliss

"I just kind of reacted like I always did. I wasn't trying to hit a home run. Sometimes when you react to a high fastball it works out that way. Then, when I was running around the bases, fans were coming at me from everywhere, grabbing me, pounding me on the back. I was just trying to get around the bases and into the dugout---I ran at least one guy over---but I never made it to home plate. Later, after I got to the clubhouse, [Graig] Nettles said I should return to the field and touch home plate, just to make it official. But when we got back out there, home plate and all the other bases were gone, stripped from their moorings and confiscated by the delirious [[New York Yankees|Yankee] fans." - on his famous home run to end the 1976 ALCS

Slick-fielding first baseman Chris Chambliss played seventeen seasons in the big leagues and is best remembered for his postseason heroics with the New York Yankees.

Chambliss was selected by the Cincinnati Reds in the 31st round of the 1967 amateur draft but did not sign. He was drafted again by the Reds in the January 1968 amateur draft­, but instead opted for college. He played for UCLA in the 1969 College World Series before being chosen by the Cleveland Indians with the first overall pick in the January 1970 amateur draft. He made his pro debut that summer with the Wichita Aeros and led the American Association with a .342 average. He was in the majors the following May, 1971, and hit .275 with 9 home runs for the Indians to win Rookie of the Year honors.

After two more seasons and change with Cleveland, Chambliss was traded to the Yankees with Dick Tidrow in April 1974. He hit .304/.336/.434 in 150 games in 1975 and then hit .293/.323/.441 with 17 home runs the following season, 1976, finishing fifth in the AL MVP vote while the Yankees won their first ever division title. Chris went 11-for-21 in the ALCS and hit the Series-clinching walk-off home run off Mark Littell of the Kansas City Royals in Game 5. The image of Chambliss trying to make his way around the bases at Yankee Stadium while fans are storming the field has become iconic. He continued to put up consistent numbers for the Yankees as the club won the World Series in each of the next two seasons, 1977 and 1978.

Following the 1979 season, Chambliss was traded to the Toronto Blue Jays and, a month later, he was dealt to the Atlanta Braves. He hit 20 home runs for the team in both 1982 and 1983, with a career best .481 slugging percentage in the latter year. After initially stepping away following a season as a part-timer in 1986, he made a cool $20,000 with a lone at bat for the Yankees in 1988 ending his career; that year, he served as the club's hitting coach.

Chambliss was a minor league manager for several years, earning Minor League Manager of the Year honors from The Sporting News for his work with the London Tigers in 1990. He served as the St. Louis Cardinals hitting coach from 1993 to 1995, then was a member of the Yankees staff again from 1996 to 2000. Chris was the New York Mets hitting coach for part of the 2002 season. From 2004 to 2006, Chambliss was the Cincinnati Reds hitting coach. He was a coach for the Richmond Braves in 2008, became the manager for the Charlotte Knights in 2009, then returned to the majors as hitting coach of the Seattle Mariners from 2011 to 2012.

Chambliss' son, Russ, was a minor league player and coach. His cousin, Jo Jo White, was a guard in the NBA and inducted into the Basketball Hall of Fame in 2015.