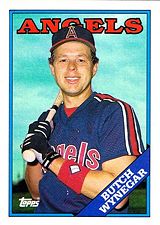 Butch Wynegar was one of the youngest position players to be selected to the All-Star Game when he represented the Minnesota Twins at the age of 20 in the 1976 All-Star Game. He had been converted to catcher in his last year of high school, was selected in the second round of the 1974 amateur draft, then in 1975 had led the Appalachian League in batting average at .346. When he made the All-Star team in his first big league season, in 1976, then was selected as the Sporting News Rookie Player of the Year, he was expected to become a superstar. Instead, he settled into being a solid, but unspectacular player, catching for the Twins, New York Yankees and California Angels before hanging up his spikes in 1988.

His best season, apart from his sensational rookie year, was in 1983 with the Yankees when he batted .296 as the team's regular catcher and was behind the plate for Dave Righetti's no-hitter against the Boston Red Sox on July 4th. Though he had little power, his decent batting averages and strong walk rate made him one of the best offensive catchers from 1982-1984 (5th in OPS+, 1st in OBP). He was solid behind the plate, especially after working to improve his throwing - a vital skill in those days when the American League was full of base stealers like Mickey Rivers, Rickey Henderson, Miguel Dilone and Willie Wilson.

After his playing career ended, Wynegar became a minor league manager and was the Texas Rangers roving minor league batting instructor from 1998 to 2002. He joined the Milwaukee Brewers as batting coach in 2003. After the 2006 season, Wynegar moved to the New York Yankees organization. He was hitting coach of the Scranton/Wilkes-Barre Yankees from 2007 to 2011, Empire State Yankees in 2012, and Scranton/Wilkes-Barre RailRiders in 2013-2014. Wynegar moved to the Indianapolis Indians as hitting coach in 2015-2017, then to the Bradenton Marauders in 2018-2019.