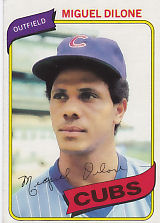 Miguel Diloné was a player with a 12-year major-league career and one big season. When he first broke into the big leagues with the Pittsburgh Pirates in 1974, he was the youngest player in the majors at age 19. He also played 22 seasons in the Dominican Republic and has managed there.

His name is pronounced "dee-lo-nay".

Diloné played for the Dominican national team in the 1971 Pan American Games and led the tournament with three stolen bases. Diloné, born in the Dominican Republic, was signed in 1972 and playing in the minors at age 17. By 1974, he was hitting .331 at Salem in the Carolina League, and the Pirates decided to have a look at him at the major league level. He appeared in 12 games but only batted 3 times for the Pirates, who won the division that year. It wasn't going to be easy for Dilone to break into an outfield which consisted, at the time, of Willie Stargell, Richie Zisk, and Al Oliver, with a young Dave Parker also trying to get playing time.

Diloné spent most of 1975 to 1977 at Charleston in the Triple A International League, coming up to the Pirates each year for a few games. He impressed at Charleston in 1976 with a .331 average, but the other two years were not impressive.

The Pirates finally took pity on him and traded him to the Oakland Athletics on April 4, 1978 for Manny Sanguillen, who was coming back to the Pirates for a second time. Oakland gave him playing time, letting him appear in 135 games, but he hit only .229. He stole 50 bases, but got caught 23 times. The next year, 1979, which was Rickey Henderson's rookie year, Diloné was sold to the Chicago Cubs in mid-season while hitting only .187. He finished up the season with the Cubs hitting .306 for them in 36 at-bats.

At this point, there was no reason to suspect that Dilone's career was going anywhere. Although he was only 25 years old in 1980, he hadn't impressed in his previous major league chances. But when the Cleveland Indians purchased him, he suddenly came alive. In 132 games in 1980, he hit .341. He was third in the league in batting. He stole 61 bases, getting caught only 18 times. On the negative side, he only drew 28 walks.

In 1983, he played little with Cleveland, hitting .191. In September, he was traded to the division-leading Chicago White Sox, and a week later back to the Pirates. The next year, he played well with the Montreal Expos, which he had joined as a free agent, hitting .278 and stealing 27 bases in 29 attempts.

In 1985, he finished out his career, splitting his time between the Expos and the San Diego Padres. He was done with major league baseball at age 30.

The most similar player, according to the similarity scores method, is John Moses.