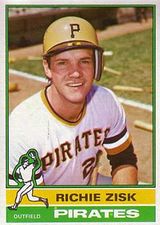 Zisk was born in Brooklyn, NY and drafted by the Pittsburgh Pirates at the age of 18 in the 1967 amateur draft. Richie's family moved to New Jersey as a youngster, and he graduated from Parsippany High School, a town which several years later produced another Pirate, Joe Orsulak. He attended Seton Hall University in New Jersey, close to New York City, but he was already playing pro ball in 1967.

Richie moved up one notch of the minor league ladder each year from 1967 to 1971, showing power every step of the way, and winning three minor league home run championships, until he hit the big leagues for 7 games in 1971. It was a year when the Pirates won the World Series, but Zisk did not appear in the postseason.

Zisk did well in the minors during most of 1972, hitting .308 with a .571 slugging percentage in what was his last stint on the farm. Hall of Fame outfielder Roberto Clemente died in a plane crash on December 31st that year, and that opened up a spot in the outfield. The next year, 1973, Zisk appeared in 103 games for the Pirates, posting a .324 batting average, a .364 on-base percentage, and a .526 slugging percentage. His defensive range in the outfield was below average, as it often was in his career (with a notable exception in 1974). In 1974, he hit .313 with 17 home runs and 100 RBI, as the Pirates won a division title. Zisk hit .300 in the Championship Series against the Los Angeles Dodgers.

It was a darn good outfield in Pittsburgh in those days - Zisk played alongside Willie Stargell and Al Oliver, while Dave Parker and Miguel Dilone tried to get some playing time. The team was loaded with power hitters and nicknamed the Pittsburgh Lumber Company. In 1975, Zisk hit .290 with 20 home runs, as Pittsburgh again won its division. Zisk hit .500 in the Championship Series, this time against the Cincinnati Reds, as he batted fifth in the order behind Oliver and Stargell (who by now had moved to first base), and ahead of Parker. In 1976, his last year with the Pirates, he hit .289 with 21 home runs.

The Pirates traded him to the Chicago White Sox for two pitchers, Rich Gossage and Terry Forster; all three players were in the last year of their contracts, and neither team thought they would be able to retain their homegrown stars when they hit free agency. Zisk became one of the South Side Hitmen in 1977 with 30 home runs, playing alongside outfielders Oscar Gamble, who had 31 homers, and Ralph Garr, who hit .300. In free agency, he chose to sign with the Texas Rangers, inking a 10-year contract on November 9, 1977; he spent three years in Arlington. He hit around 20 home runs each season, and had his highest batting average with them, .290, in the last of the three years.

Traded to the Seattle Mariners in an eleven-player deal, he finished out his career in three seasons with them. He did well in the strike-shortened 1981 season, hitting .311 with 16 home runs, and in 1982 he hit 21 home runs batting .292. He was named Comeback Player of the Year in 1981, even though he had hit well the previous year, and his rise in batting average was largely a function of having moved to a better hitting park. By then, he was largely a designated hitter -- in fact he never played defensively for the M's -- and when he fell off in 1983 to .242 at the age of 34, because of various injuries, he was done. After not playing at all in 1984, the team released him on January 16, 1985, though they continued to pay him through 1987 to fulfill the 10-year contract he had signed prior to the 1978 season with the Rangers.

The most similar player to Zisk, according to similarity scores, is a surprise - Sid Gordon. Other players that are listed among the ten most similar, in terms of career performance, include Bill Skowron, Pedro Guerrero, Kevin McReynolds, Rondell White, and Jackie Jensen.

An article in Baseball Digest in 2001 looked at major league career leaders by alphabetical last name. Zisk was one of the leaders in most categories, along with other long-time ballplayers whose names started with Z: Heinie Zimmerman, Chief Zimmer, Todd Zeile, and Gus Zernial.