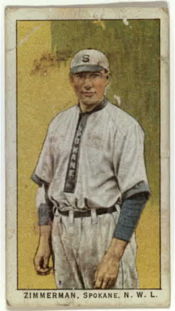 Henry "Heinie" Zimmerman played 13 seasons in the major leagues and was a star third baseman for years before being banned in 1919. He won a Triple Crown in 1912, although that was shrouded in controversy, and was in three World Series in 1907, 1910 and 1917. A play in the 1917 World Series was so noted that when he died, the New York Times obituary of Zimmerman was titled "Giants' Heinie Zimmerman Dies; Committed 1917 Series 'Boner' ".

Zimmerman was born in the Bronx and at age 14 became a plumber's apprentice to help his family earn income. He was a sandlot and semi-pro player in New York City before playing minor league ball in 1906 and 1907.

Henry developed a reputation in baseball circles as a dim-witted eccentric. He was also noted for erratic play. He was sometimes referred to as "Zim" or "the Great Zim".

At the major league level, he might have languished as a back-up but for injuries/illness suffered by Johnny Evers and Jim Doyle. 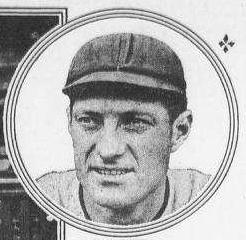 He was credited with winning the National League Triple Crown at the end of the 1912 season but there were questions about who actually led the NL in RBIs, which were not yet an official statistic that year. He was originally credited by Ernest Lanigan of the Sporting News with a league-leading 98, with Larry Doyle second with 97 and Honus Wagner third with 94. When revised totals were compiled by David S. Neft for the first edition of the Baseball Encyclopedia in 1969, they indicated that he finished that season with 99 RBI, 3 fewer than Wagner and one behind Bill Sweeney and as a result, Zimmerman's name was removed from most reference sources. However, there were still questions about those totals and in 2013, researcher Herm Krabbenhoft conducted exhaustive research on that season, and came up with revised totals that are now considered the most accurate and have been accepted by most reference sites, including Baseball-Reference.com; those give Zimmerman the lead with 104, followed by Wagner with 101 and Sweeney with 99. As a result of this revision, those sources have also restored credit to Heinie for the 1912 Triple Crown.

He is also infamous for a play that occurred in Game 6 of the 1917 World Series: in a rundown play, the Chicago White Sox's Eddie Collins avoided Giants' catcher Bill Rariden, forcing Zimmerman to try to chase him down with the ball in his hand, as none of his teammates had covered home plate behind Rariden; Collins crossed home plate with Zimmerman running behind him, scoring a crucial run, and the White Sox went on to win the game and the Series. The play became known as the Zimmerman Chase.

In 1919, Zimmerman was banned from baseball for fixing games along with Hal Chase.

After the major leagues he tried to play semi-pro ball but was removed from the field when the game was to take place on a field owned by someone connected to organized baseball. He worked as a plumber, ran a speakeasy and worked as a steamfitter.