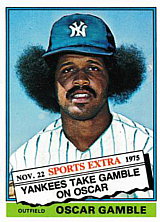 "When I'm at bat, I'm in scoring position." - Oscar Gamble 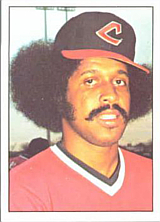 Outfielder Oscar Gamble was a high-profile star who played six and a half seasons with the New York Yankees and starred for the 1977 Chicago White Sox during 17 years in the majors. He may have sported the most voluminous Afro in the history of Major League Baseball.

Selected by the Chicago Cubs in the 16th round of the 1968 amateur draft, Gamble reached the majors the following season as a 19-year-old. He was discovered and signed by former Negro Leagues legend Buck O'Neil, who was a scout for the Cubs a the time. After the 1969 campaign, he was traded to the Philadelphia Phillies and split the next three years between the majors and the Triple A Eugene Emeralds, for whom he hit in the .290s each year. Perhaps his biggest claim to fame with the Phillies is collecting the last hit ever at Connie Mack Stadium on October 1, 1970.

Following the 1972 season, Gamble was traded to the Cleveland Indians for Del Unser and began to see regular playing time, split between designated hitter and the outfield. After hitting at least 15 home runs in each of three summers there, he was sent to the New York Yankees for Pat Dobson and was the regular right fielder on the club that reached the 1976 World Series.

The following spring, Gamble was traded again, this time to the Chicago White Sox, along with La Marr Hoyt, for shortstop Bucky Dent. He had his best big league season there, hitting .297 with 31 homers as the "South Side Hit Men" made an unlikely run for the AL West title in 1977, ultimately finishing just short in third place. With his free agency looming after the season, he made no secret of his contract demands, which the Sox were unable to meet. Following the season, he signed with the San Diego Padres.

Gamble remained with the Yankees for five more seasons and hit .600 with a pair of home runs in the 1981 ALDS against the Milwaukee Brewers. Mostly a left-handed platoon player, he was especially effective at Yankee Stadium, where he slugged .585 over the course of his career. He returned to the South Side of Chicago as a free agent in 1985 but was released in August after hitting just .203 in 70 games.

Overall, Gamble hit exactly 200 home runs in his major league career. After his big league days, Gamble played for the St. Lucie Legends of the Senior Professional Baseball Association in 1989, appearing in 4 games and batting .273. His son, Sean Gamble, played in the Phillies organization, most recently with the Lakewood BlueClaws, and later became a scout.

Gamble was known for his distinctive hairstyle, a huge Afro that was barely contained under his cap and in hindsight is considered emblematic of his era. The cap would often come flying off when he was running the bases, revealing his coif in all its glory. His distinctive look is captured on many of his baseball cards issued in the 1970s.

He died in 2018 at age 68 of a rare tumor of the jaw, a condition which had been diagnosed nine years earlier and was originally considered benign, but worsened. Contrary to others who suffered this condition, he was not a user of chewing tobacco.

"They don't think it be like it is, but it do." - Oscar Gamble, on his time with the Yankees