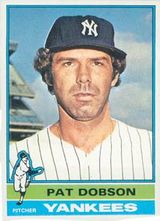 Pat Dobson was best known for his years as a pitcher with the Baltimore Orioles and the New York Yankees in the early 1970s.

After his playing career ended, Dobson was pitching coach for the Nashville Sounds in 1980-1981 and the Milwaukee Brewers from 1982 to 1984. He later held the same position with the San Diego Padres from 1988 to 1990, the Kansas City Royals in 1991, and the Baltimore Orioles in 1996. He was employed by the San Francisco Giants as an advance scout at the time of his death in 2006 from leukemia, one day after receiving his diagnosis.

During the 1989-1990 season, he managed the Fort Myers Sun Sox of the Senior Professional Baseball Association. He also managed the Sun Sox the next year until the league ceased operations in December of 1990.