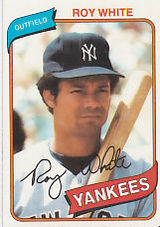 Roy White is probably the nicest Goddam guy on the club. He's quiet. He's well respected by everybody, and he's very classy, he and his wife both. - Sparky Lyle in The Bronx Zoo

Outfielder Roy White played fifteen years in the majors, all with the New York Yankees, and was a two-time American League All-Star.

Originally a second baseman, White played high school ball in Compton, California before signing with the Yankees. By the time he reached the majors late in the 1965 season he was primarily an outfielder, and he hit .225 in 115 games the next year in his first full big league season. After splitting 1967 between the Yankees and the Triple A Spokane Indians, he became the regular New York leftf ielder in 1968, hitting .267 with 17 home runs, 20 steals, and 89 runs scored. Even with missing time due to military service the following summer, in 1969, he still hit .290 and made the AL All-Star squad for the first time.

In 1976, White led the AL with 104 runs scored and stole a career-best 31 bases as a 32-year-old. The Yankees won the pennant that year, and White hit .294 with 3 doubles in the ALCS. After the club won the 1977 World Series, he went on the disabled list for the first time in his career in 1978 with a hamstring injury and was limited to 103 games. He came back strong in the postseason, hitting .313 in the ALCS with a game-winning home run in the final game and batting .333 with 1 homer and 4 RBI in the 1978 World Series.

White hit just .215 in 81 games in 1979 and became a free agent after the season. He went to Japan and signed with the Tokyo Giants, where he was a teammate of Sadaharu Oh starting in 1980. He retired after three seasons with the club.

Following his playing days, White was a Yankees coach from 1983 to 1984 and again in 1986 and worked for the club in various capacities for many years. In 1999, he joined the Oakland Athletics organization as hitting coach of the Vancouver Canadians and spent the next four years on the staff of the Sacramento River Cats. He rejoined the Yankees staff in 2005 and was first base and outfield coach for two seasons.