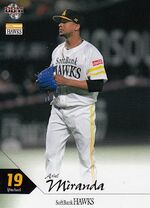 Pitcher Ariel Miranda has played in Cuba, the major leagues, Japan, South Korea and Taiwan. He won a MVP in Korea.

He was signed by the Baltimore Orioles on May 23, 2015. Between the GCL Orioles, Frederick Keys and Bowie Baysox that year, he went 6-3 with a 3.60 ERA in 14 starts, striking out 71 batters in 70 innings. He began 2016 with the Triple-A Norfolk Tides, going 3-7. On July 3, the big league club selected his contract and he debuted that day. After starter Ubaldo Jimenez struggled against the Seattle Mariners, Miranda came in in relief and tossed two innings, allowing three runs on four hits. He did strike out four batters, including the second man he faced, Adam Lind. On July 4th, he was sent back to the minors. However, he must have impressed Seattle, as on July 31st, they acquired him from the Orioles in a trade for veteran major leaguer Wade Miley. He was sharp for the 2016 Mariners at 5-2, 3.54 in 11 games (10 starts).

On September 5, 2017, Ariel pitched six no-hit innings for Seattle, but ended up with a no-decision against the Houston Astros. He was wild even if the Astros were unable to get a hit, as he allowed six walks and needed 112 pitches to complete the 6 frames. In the 3rd, he allowed 3 walks and a sacrifice fly to Alex Bregman for a run, and the score was tied at 1-1 when he left, as his opponent, Justin Verlander, making his first start for Houston, was also stingy. The no-hit bid was broken in the 7th, when Cameron Maybin homered off reliever Emilio Pagan with one out, following a walk to Brian McCann, providing the Astros with a 3-1 win. He was 8-7 with a 5.12 ERA for the year. He was second in the 2017 AL with 37 homers allowed (one behind Rick Porcello), tied for 5th with 3 complete games and tied Martín Pérez for 8th with 63 walks. He had a 81 ERA+ but was second on the M's in wins and whiffs (trailing James Paxton).

He signed with the Chinatrust Brothers for the 2020 CPBL. On August 5, he became the 5th CPBL pitcher to strike out the side on nine pitches for an immaculate inning and first in 11 years. He followed Yi-Chuan Lin, John Burgos (who did it twice), Mike Garcia and Ryokan Kobayashi. [3] For the season, he was 10-8 with a 3.80 ERA. He was among the leaders in ERA (3rd, behind José De Paula and Henry Sosa), wins (tied for 3rd), IP (156 1/3, 5th, between Ryan Carpenter and Mike Loree) and strikeouts (3rd, behind De Paula and Sosa). He hit 11 batters to tie I-Cheng Wang for the league lead. [4] He beat Teddy Stankiewicz and the Uni-President Lions in Game 3 of the 2020 Taiwan Series but lost Game 7 in a rematch with Stankiewicz.

His globetrotting tour continued with the Korea Baseball Organization, signing with the Doosan Bears. He was 14-5 with a 2.33 ERA and 225 K in 173 2/3 IP in the 2021 KBO. He won the ERA title (.30 ahead of Jung-hyun Baek), tied for 4th in wins, was 6th in IP, led in strikeouts (46 ahead of Carpenter), was 4th in WHIP and tied Wes Parsons for 9th in walks (63). [5] He broke Dong-won Choi's strikeout record by two; the mark had stood since 1984. [6] In the 2021 Korean Series, his third title Series in four years. As in Japan and Taiwan, he got the nod in Game 3. He pitched well, allowing one run in five to the kt Wiz but was outdueled by fellow Cuban Odrisamer Despaigne; the Bears were swept. After the Series, he was named the winner of the KBO MVP with 588 points. Jung-hoo Lee was next with 329 points, then Baek-ho Kang at 320. [7] He was the 7th foreigner to win KBO MVP, but the third in a row following Josh Lindblom and Mel Rojas Jr. Interestingly, four of the seven foreigners to win had been pitchers for Doosan, following Danny Rios, Dustin Nippert and Lindblom.