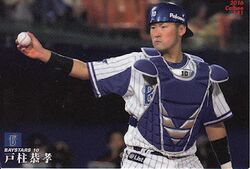 Yasutaka Tobashira is a Nippon Pro Baseball catcher whose first season was in 2016. As a rookie with the Yokohama Bay Stars, he was named to play in the 2016 NPB All-Star Game, but still only hit .226 in 124 games, with 2 homers and 23 RBIs. In the first of the two All-Star Games played that year, on July 15th, he was one of an unprecedented two rookies - along with Shun Takayama - to get a hit. He was also the second player to get a hit and RBI in his first NPB All-Star Game plate appearance, following Akinobu Okada in 1980. He was the Central League starting catcher in the second game, played the next day. That season, he helped Yokohama's pitching staff to cut down its number of wild pitches from a record of 68 in 2015 to just 39. He finished third in the voting for the 2016 Central League Rookie of the Year Award after Takayama and Shota Imanaga. However, after that solid beginning, he could never establish himself as a front-line player - even though he did appear in the first game of the 2017 NPB All-Star Game. His batting average sank to .214 in 112 games in 2017, but he played in the 2017 Japan Series against the Fukuoka Softbank Hawks. He was at the center of a controversial play in the 7th inning of Game 2 on October 29th, when he apparently tagged out Kenta Imamiya at home, but after a prolonged video review, the umpires decided that Imamiya had managed to slip his left hand below the tag as he was diving head-first, and the run was granted, putting Fukuoka ahead, 4-3, which would be the final score.

After those first two fairly successful seasons, he then made appearances with Yokohama's ni-gun team in the Eastern League every season after that, except for 2020. His problems stemmed from his weak bat, with batting averages of .179 in 2018 and .200 in 2019. While he had hit 9 homers in 2017, he hit only 1 at the top level each of the next two years, and 5 (to go along with a .212 average) in 2020. By 2019, he had slipped down the depth chart to the point of being considered the BayStars' third-string catcher. He did only marginally better in 2021, hitting .221 with 3 homers and 15 RBIs in 56 games at the top level. What has kept him returning to the top level is that he is considered one of the best pitch framers in Japan.