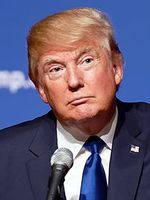 Republican Donald Trump became United States President in 2017, after having defeated Democrat Hillary Clinton, the wife of Bill Clinton, in the 2016 presidential election.

Per an article at MLB, he was a power-hitting catcher as a youth. [1] Reportedly, Trump was scouted by both the Philadelphia Phillies and Boston Red Sox in high school. Instead, he chose to attend college.

He followed in his father's footsteps as a successful real estate developer, although his career was also marred by a number of bankruptcies. His business endeavors later involved the New York Yankees. He backed the team moving to East Rutherford, NJ in the 1970s, though the move never unfolded. He is a fan of the club and appeared regularly at Yankee Stadium, often alongside former New York mayor and early political backer Rudolf Giuliani. He is also a supporter of the New York Mets. He made a foray into professional sports in the 1980s as owner of the New Jersey Generals of the short-lived United States Football League. His insistence that the upstart league compete head-to-head with the NFL was a direct cause of its demise after a promising start as a spring league.

Shortly before his inauguration, on January 9, 2017, he met with Commissioner Rob Manfred in a meeting arranged by Yankees President Randy Levine. Trump described himself as "a great baseball fan". However, he did not appear to pay much attention to the sport during his first couple of tumultuous years in the White House, instead focusing on criticizing the NFL for various perceived faults. He made a rare incursion in the world of baseball after Game 4 of the 2018 World Series, when, out of the blue, he criticized Los Angeles Dodgers manager Dave Roberts' bullpen usage, blaming him for his team's loss. He was immediately rebuked from all sides for making inane comments only hours after a deadly antisemitic attack on a synagogue in Pittsburgh, PA. Dodgers pitcher Rich Hill, who was the one whose removal from the game prompted the president's tirade, put it thus: "There was a mass shooting yesterday. The focus, in my opinion, of the president is to be on the country, and not on moves that are made in a World Series game." The President also tweeted in support of Curt Schilling's candidacy for the Hall of Fame in January 2019; Schilling had been a vocal supporter of his campaign back in 2016. On April 8, 2019, he revoked an agreement reached a few months earlier by Major League Baseball with the Cuban Baseball Federation, as a result of breakthroughs in the U.S.'s relations with Cuba achieved by President Barack Obama's Administration. The agreement allowed for a formal process for Cuban players to join Organized Baseball; Trump objected to transfer fees being paid to the Federation as part of the agreement.

He did not throw a ceremonial first pitch during his presidency, but was present for Game 5 of the 2019 World Series, played at Nationals Park in Washington, DC. However, he was in the midst of a congressional impeachment investigation by that point, and was heartily booed by those present when he was shown on the scoreboard. In February of 2020, he tweeted in support of Pete Rose's reinstatement. In late July 2020, he claimed to reporters that he would throw a first pitch at a Yankees game the following month; however, the Yankees soon indicated that he had never been invited to do so. He was apparently jealous of one of his foils, Dr. Anthony Fauci, who had thrown the first pitch of the shortened season a few days earlier and received very positive coverage, even if his actual pitch was pretty awful. During his reelection campaign in October 2020, he raise the ire of Jackie Robinson's heirs, when he used his picture without authorization in one of his advertisements. Jackie's daughter, Sharon, objected publicly and in very clear terms: "The Trump campaign is in opposition to all that Jackie Robinson stood for and believed in. We're insulted and demand that his image be removed!"

As a figure in the entertainment industry, Trump hosted a television show called The Apprentice. Jose Canseco appeared on the program.

In addition to conservative pitcher Schilling, other baseball figures who were vocal supporters of Trump during his successful campaign include Johnny Damon, Clay Buchholz, Paul O'Neill and John Rocker.[2][3] Mariano Rivera has also been an outspoken fan.

He was defeated by Joe Biden in his bid for re-election in 2020, in a close election whose outcome was uncertain for days as a surge of mail-in and absentee ballots were slowly counted in a number of states. He proclaimed himself the winner on election night, and refused to concede when ballot tallies made it clear that Biden had not only won the popular vote by a significant margin, but the electoral college as well. Shortly after leaving the White House, he made another comment on baseball matters as he criticized Commissioner Rob Manfred's decision to move the 2021 All-Star Game away from Atlanta, GA in protest over Georgia's adoption of a controversial voting law. Trump was a big advocate of such a law and called on his supporters to boycott Major League Baseball. The following July, when the Cleveland baseball team announced that it would be called the Cleveland Guardians starting in 2022, he expressed his strong disapproval, baselessly claiming: "I guarantee that the people who are most angry about it are the many Indians of our Country" and calling himself a "FORMER baseball fan", using the all-caps format to emphasize his point.