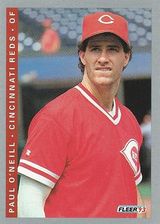 Paul O'Neill was signed as a 4th round pick in the 1981 amateur draft by the Cincinnati Reds and scout Gene Bennett.

O'Neill won a batting title and five world championships, four with the with the New York Yankees, and one with the Cincinnati Reds. Yankee fans will remember his two triples in the 2000 World Series, the walk he fought for in the 12th inning of Game 1, fouling off endless nastiness from Armando Benitez of the New York Mets, and the memory of his angry fight with his own age and decline – the double he hit late in the tied, brutal, developing classic of a Game 7 in 2001, the double in the gap where he willed his injured knees and thirty-nine-year-old body spinning around second base, charging desperately for third where he could have scored on a fly ball to give the team the lead and coming up a foot short, limping back to the dugout with his head down in disgust.

His strong temper is also evident in another famous clip, this one dating back to his time with the Reds, in a game against the Philadelphia Phillies on July 5, 1989. With the score 2-2 in the 10th inning and runner Steve Jeltz on second base, Lenny Dykstra hit a ball that dropped in front of him in right field. He knew that he had to make a quick throw to the plate, but bobbled the ball twice, then, in anger, he kicked at it with his left foot, thinking the game was lost. But, lo and behold, Jeltz had slipped on his way to third base and the ball went straight to first baseman Todd Benzinger, preventing Jeltz from scoring although Dykstra made it to second as the kick was not as good as an actual throw to Benzinger would have been. The Reds went on to lose the game, but the play lives on forever in baseball lore.

Now retired, O'Neill is a broadcaster.

He appeared on Seinfeld as himself.

On August 9, 2014 the Yankees dedicated a plaque to O'Neill inside Monument Park. In 2022, they announced that they would retire his uniform number, 21, on August 21st.