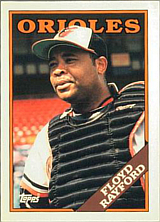 It was said that Orioles manager Earl Weaver decided to keep Rayford on the O's opening day roster in 1980 because he had never had a player who could be used at both third base and catcher, and it opened up a whole set of possible in-game permutations for a manager who just loved to make these types of substitutions. However, it soon became apparent that Rayford was not a capable fielder at either position, and needed more minor league time anyway; he was sent back to the minors in early May after appearing in just seven games. His only other game that season was the second game of a doubleheader on October 4th, on the season's penulimate day, when he went 2 for 4 as the starting third baseman against the Cleveland Indians and collected his first career RBI.

In 1989, Rayford played for the St. Lucie Legends of the Senior Professional Baseball Association.