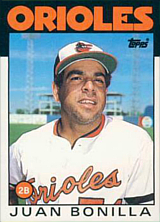 Juan Bonilla was a 1976 All-American for his play with the Florida State Seminoles. A veteran of parts of six big league seasons, Juan had one season as a regular with the 1983 San Diego Padres. He batted .237 in 152 games and did not return to the bigs until 1985 in a cameo in the Bronx. He was possibly "blackballed" in 1984 [1] due to some recreational drug use back in 1982.

He was known in the Puerto Rico Winter Baseball League as Guillermo Bonilla.