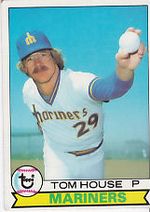 "While I was [with the Rangers] I was very fortunate to have a pitching coach by the name of Tom House. And Tom and I are of the same age and Tom is a coach that is always on the cutting edge. And I really enjoyed our association together and he would always come up with new training techniques that we would try and see how they would work in to my routine. And because of our friendship and Tom pushing me, I think I got in the best shape of my life during the years that I was with the Rangers." - Nolan Ryan, in his Hall of Fame speech

Pitcher Tom House caught Hank Aaron's 715th home run (he was in the Atlanta Braves bullpen at the time). Following his playing days, he was a pitching coach for the Las Vegas Stars in 1983-1984. He was the Texas Rangers pitching coach from 1985 to 1992. He was known for his unconventional teaching methods at the time.

House was the pitching coach at University of Southern California from 2008 to 2011. He features prominently in the 2014 film Million Dollar Arm, where he is portrayed by actor Bill Paxton.