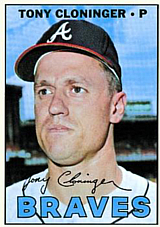 Tony Cloninger pitched a dozen years in the majors, most notably for the Milwaukee Braves. Despite hitting just .192, he belted 11 home runs and drove in 67 runs, impressive numbers for a pitcher. In fact, he is best remembered for feats of strength with the bat in 1966.

Cloninger was signed by the Milwaukee Braves in 1958. The following year, while playing for the Cedar Rapids Braves in the Three-I League, he had one of the worst stretches of any pitcher to eventually become a successful major leaguer. Over a ten-game span with the team, he went 0-9 with a 9.59 ERA, allowing 58 walks in only 46 innings. Despite these struggles, the fireballin' Cloninger reached the majors with Milwaukee in 1961. In 1964, he led the Braves staff with 19 wins, part of a 19-14, 3.56 season with 163 strikeouts in 38 games. The following year, 1965, the Braves' last season in Milwaukee, WI, he was 24-11, 3.29 with 211 strikeouts, but 119 walks, in 279 innings; part of back-to-back seasons in which he paced the senior circuit in free passes. Despite the success, he received zero votes for the Cy Young Award because he had the poor fortune to pitch at a time when Sandy Koufax was dominating, the lefty winning 26 games as the unanimous winner.

The Braves moved to Atlanta in 1966, and Tony tied Ken Johnson for the team lead with 14 victories, finishing 14-11, 4.52 with 178 strikeouts in 257 2/3 innings. His work with the bat that summer is how he is best remembered. On June 16th, against the New York Mets, he clubbed a pair of home runs while allowing just 1 run on 5 hits in a complete game, 17-1 laugher. On July 3rd, he hit two grand slams as well as an RBI single against the San Francisco Giants at Candlestick Park, becoming the first National League player and only pitcher to do so. Again he went the distance, allowing just 3 runs in another 17-run laugher, 17-3. As of 2020, only twelve other big leaguers have clubbed two grand slams in one game. Overall, during his six-outing stretch from June 16th to July 3rd, he belted 4 homers with 18 RBI.

Tony fell off starting in 1967, never tallying more than 200 innings in a season again. He moved to the Cincinnati Reds in 1968 along with a key future piece of the Big Red Machine, Clay Carroll. Tony pitched twice in the 1970 World Series but did not have much luck, going 0-1 with a 7.36 ERA in those two appearances. He spent part of 1972 as a reliever for the St. Louis Cardinals, finishing his career with the Richmond Braves that season.

Cloninger was pitching coach of the Oneonta Yankees in 1987 and Albany-Colonie Yankees in 1988. He was a member of the New York Yankees coaching staff from 1992 to 2001. He also worked as the pitching coach for the Boston Red Sox from 2002 to 2003, when he was diagnosed with cancer and forced to take a leave of absence. After he recovered, he was a scout in the Class A Carolina League in 2005. He spent the rest of his life as a consultant with the Red Sox, passing away in 2018. A grandson, Erich Cloninger, played professionally in 2003 and 2004.