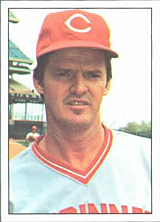 “Did you ever hit anybody on the head with a ripe tomato? It sure makes a funny noise and there’s a way it flattens out to really mess up a guy’s hair.” - Clay Carroll, keeping a bullpen loose

Clay Carroll was a two-time All-Star reliever and the National League saves champion of 1972. Nicknamed "Hawk", he was a key member of the tremendously strong bullpens that characterized the Big Red Machine Cincinnati Reds clubs of the 1970s.