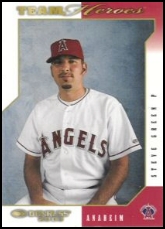 Steve Green was a member of the Canadian Junior National Team in 1996. He was drafted by the Anaheim Angels in the 10th round of the 1997 amateur draft.

He led the 1999 Pan American Games in ERA, allowing no runs in 10 innings. He was the winning hurler in a stunning victory over the Cuban national team in the round-robin to help Team Canada to the best record in the competition.

Green began the 2000 season with Erie (AA) before being promoted to Edmonton (AAA) on June 21st.

He pitched one game for the Anaheim Angels in 2001, was injured and spent all of 2002 on the disabled list due to Tommy John surgery. The Angels used a loophole in the postseason roster rules [1] to get Francisco Rodriguez to replace him in the 2002 postseason.

In 2003, he was with Salt Lake (AAA), and he was again placed in the disabled list due to right forearm stiffness. He also spent 2004 with the Salt Lake team.

His 2005 season was split between Akron (AA) and Toledo (AAA). He won the International League Championship with the Toledo squad.

Green had a busy year in 2006. He won his second International League Championship with Toledo and he played for Team Canada at the 2006 World Baseball Classic. For the 2007 season, Green played for Norfolk (AAA) where he went 2-4 with a 4.81 ERA. He posted three saves in 52 games played.

Green was 2-0 for Canada in the 2008 Final Olympic Qualification Tournament to help them win a spot in the 2008 Olympics. He struck out 9 and allowed no runs in 6 2/3 IP, leading the tournament in ERA and tying Min-han Son, Kwang-hyun Kim, Chien-Ming Chiang, Chien-Fu Yang and teammates Scott Richmond and Alexandre Periard for the most wins. Despite being a reliever, he tied Kim, Adam Blackley and Barry Armitage for sixth in strikeouts.

Green threw 6 shutout innings, allowing 2 hits, in the 2008 Olympics, as Canada's top hurler. He had 4 scoreless innings against Taiwan, one against Japan and one against Cuba. He also played for Canada in the 2009 World Baseball Classic.

In 2010, he signed to pitch with the Capitales de Québec in the Can-Am Association but had a disagreement with management after one game and left the team to play semi-pro baseball instead.