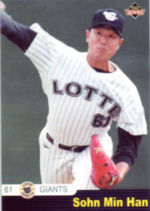 Min-han Son has been a top pitcher in the Korea Baseball Organization and is a former league MVP.

The 30-year-old helped Lotte out of the cellar and into 5th place in 2005 with a 18-7, one save, 2.46 campaign. He walked 40 in 168 1/3 innings, having found good control over the years. He easily led the league in ERA and also led in victories. Lotte's other pitchers were still just 40-60. He won the Korea Baseball Organization MVP award and also a KBO Gold Glove.

Son was on the South Korean team for the 2006 World Baseball Classic, going 2-0 with a 2.45 ERA in beating China and the USA and in a rough relief stint against Japan in the semifinals. He tied Jae Seo, Koji Uehara, Odalis Perez and Ormari Romero for second in the event in wins, one behind leader Daisuke Matsuzaka.

In the KBO season, Son had a 10-8, 2.78 record with one save. He won Bronze in the 2006 Asian Games. The 2007 season was another good one as Min-han went 13-10 with a 3.34 ERA to place 9th in the league in ERA. Son was one of the top pitchers in the 2008 Final Olympic Qualification Tournament, helping South Korea clinch a spot in the 2008 Olympics. He allowed 5 hits and one run in 12 innings, striking out sixteen and walking two, going 2-0. He benefited from facing two weak offenses, South Africa and Germany. Son was 4th in the tournament in ERA behind Steve Green, Chien-Fu Yang and Chih-Chia Chang. He was second in strikeouts, six behind leader Francisco Campos and six ahead of the #3 finishers. He tied Alexandre Periard, Green, Scott Richmond, Kwang-hyun Kim, Chien-Ming Chiang and Yang for the most wins.

Son was president of the Korea Professional Baseball Players Association when they voted to unionize in December 2009.