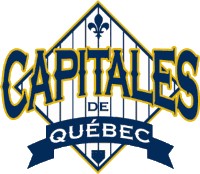 Les Capitales de Québec, or the Quebec Capitales in English, are a team in the independent Frontier League. They began play in 1999, when minor league operator Miles Wolff decided to bring professional baseball back to a city which he loved, but which had been without a team since the Eastern League's Quebec Metros left town after the 1977 season.

Les Capitales played in the Northern League East during their first few seasons. They played .500 ball their first year, with a 43-43 record, then finished first in the League's northern division in the second half of 2000 under the leadership of former major leaguer Jay Ward. They lost a playoff game for the first-half title in 2001, then faded in the second half to miss the post-season altogether. The year when the Northern League East split from the Northern League to become the Northeast League - 2003- the Capitales returned to the post-season, managed by former Los Angeles Dodgers catcher Joe Ferguson. They became the league's regular-season champions in 2004. In 2005, former minor league pitcher and Capitales player Michel Laplante took over as manager, the first Quebecker to assume the position, while Eddie Lantigua had a tremendous season at the plate, hitting .324 with 31 home runs and 112 runs batted in, all team records. 2005 was also the first season of the re-born Can-Am League, the third league in which the Capitales have played since their inception. They won the league championship in 2006 and again in five consecutive years from 2009 to 2013.

The Capitales have also been a pioneer in bringing veteran Cuban players to North America. In 2014, OF Yuniesky Gourriel joined the team, and in 2015, three others followed, Alexei Bell, Yordan Manduley and Ismel Jimenez. The four were not yet allowed to play road games in the United States, but with all home games being played in Canada, and two of the circuit's five other teams based in Canada, there were enough games in which they could play for their presence on the team to be worthwhile.

Les Capitales play in the historic Stade Municipal de Québec (Quebec City Municipal Stadium), built in 1938, and which has hosted every Quebec City team since play began in 1939. The stadium had fallen into disrepair after the Metros' departure, and barely escaped the wrecking ball in the early 1990s. It was renovated at a cost of $2 million before the 1999 season and is acknowledged as one of the nicest baseball stadiums in all of Canada.

Contrary to the now-departed Montreal Expos, Les Capitales have always tried to recruit local players into their line-up and to establish a strong connection with their fan base. As a result, the team has drawn extremely well, demonstrating that there is a large number of baseball fans in the province of Quebec. Their success persuaded local authorities in nearby Trois-Rivières, QC to renovate their own historic ballpark, Stade Fernand-Bédard, a carbon-copy of the Capitales' home grounds, in order to field a team, and they were joined by Ottawa in 2015. In both cases, the Capitales had played some games in the two cities in earlier year to help gauge interest for installing a Can-Am Association team in these markets.

In 2017, the Capitales made some major renovations to their ballpark, which got a corporate sponsor and was renamed "Stade Canac", installing artificial turf and making adjustments to allow it to be used as an indoor facility in the winter. They won their 7th league title that year, their first since 2013, as they swept through the postseason in six games.