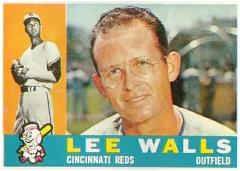 "Lee Walls is 25 years old, stands several inches over 6 feet and is lean and hard. He wears black horn-rimmed glasses, which make him look more like a science major than a home-run hitter." - from a Sports Illustrated article in 1958

A member of the Pittsburgh Pirates at the young age of 19, Lee Walls played ten years in the majors, most notably with the Chicago Cubs in 1958, for whom he hit 24 home runs with a .304 batting average. He was on the 1958 All-Star team. He still holds the Cubs' all-time record for home runs in the month of April, with 8 that season (tied with Sammy Sosa and Derrek Lee).

Walls said that he had heard Ted Williams say that working with weights was a good idea, so he worked with 30-pound bar bells in the 1957-58 off-season.

He was also a backup infielder/outfielder and pinch-hitter for the Los Angeles Dodgers in 1963, a year in which they won the pennant, but he did not appear in the 1963 World Series with them.

After his playing career ended, Walls was a coach for the Oakland Athletics and New York Yankees.

He had gone to high school in Pasadena, CA and had the opportunity to go to college on a football scholarship but chose baseball instead.

During the 1955-56 off-season he worked as the maitre-d' in a restaurant in Palm Springs, CA.