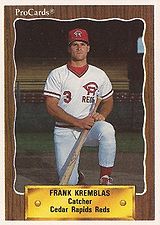 Frank Kremblas was selected by the Cincinnati Reds in the 23rd round of the 1989 amateur draft and played in the minors for eight years. He had his best season offensively in 1993 with the Indianapolis Indians, hitting .243/~.326/.381 as a utility infielder, and overall played four seasons in AAA with Indianapolis. During his playing career, he hit .233 with 20 homers and 201 RBIs in 621 games.

After serving as a coach with the Ottawa Lynx in 1997, Kremblas began managing in the minors in 1998 and led the Nashville Sounds to a Pacific Coast League title in 2005. In 2009-2010, he returned to Indianapolis as skipper of the Indians. In 2011 Kremblas was the Pittsburgh Pirates' coordinator of instruction and in 2012 was the Special Assistant to Minor League Operations for the Pirates.

Kremblas' younger brother Mike Kremblas played in the minors, and Frank was his manager with the Huntsville Stars in 2003. Their father was a quarterback at Ohio State University, leading the team to a share of the National Championship in 1957.