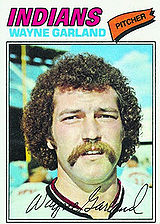 Wayne Garland signed a 10-year, $2.3 million contract with the Cleveland Indians as a member of baseball's first free agent class (24 players), following a 20-7 season as a 25-year-old with the Baltimore Orioles in 1976. Garland was released in January 1982 after just five years with Cleveland in which he accumulated a 28-48 record and exceeded 100 innings in only 2 of those 5 seasons. Despite the release, the team still had to pay him an estimated $210,000 annually through the 1986 season.

In 1989, Garland played for the Fort Myers Sun Sox of the Senior Professional Baseball Association. He went 3-2 in 11 starts for the club.

Garland turned to coaching very soon after his playing career ended in 1982. The Milwaukee Brewers hired him as a pitching coach on July 26th with the Pikeville Brewers and he moved up to the El Paso Diablos for 1983. He next served as a co-coach (with Chuck Anderson) at Aquinas Junior College in 1984-1985 on an unpaid basis. He left the college on May 8, 1986 when the college refused to pay him at a level he thought he deserved.

Garland returned to the professional ranks as the pitching coach for the Nashville Sounds in 1987 and 1988 (spending 3 games as interim manager in 1988). He spent the last four years of his coaching career in the Pittsburgh Pirates organization. He was the pitching coach for the Augusta Pirates in 1993, the Carolina Mudcats in 1994, the Calgary Cannons in 1995, and the Augusta GreenJackets in 1996.