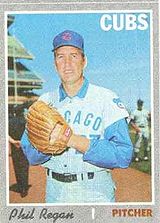 Phil Regan had a substantial 13-year career in the majors, with success both as a starter and as a reliever. As largely a starter with the 1960-1962 Detroit Tigers, he went 36-25. Regan was a starter with Detroit until he was traded at the 1965 winter meetings to the Los Angeles Dodgers. As primarily a reliever from 1966 on, he led the National League in saves twice, in 1966 and 1968.

He then earned the nickname "The Vulture" for his uncanny knack of being in the right place at the right time to earn the victory during his 14-1, 1.62 breakthrough season as a relief pitcher for the Dodgers in 1966. He was an All-Star that year and a key reason why the Dodgers won the pennant.

In 1969 he pitched for the famous Chicago Cubs team that was traditionally said to have "choked", although Regan had 17 saves with a record of 12-6.

He managed the 1996 Albuquerque Dukes and then coached for Team USA in the 2000 Olympics. Regan managed the West Michigan Whitecaps in his home state in 2002 and 2003.

In 2009-2015 he was the pitching coach for the St. Lucie Mets of the class A-Advanced Florida State League and then was named the Mets assistant minor league pitching coordinator. In a baffling move, on June 20, 2019, he was named interim pitching coach of the major league team at the age of 82 after the firing of Dave Eiland.

During a June 3, 2011 telecast, Al Hrabosky claimed that Regan - despite his religiosity - threw the "slippery elm."