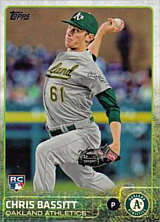 Pitcher Chris Bassitt made his major league debut with the Chicago White Sox on August 30, 2014, in the second game of a doubleheader against the Detroit Tigers. He was facing another pitcher making his debut, Kyle Ryan, and was badly outpitched. Bassitt gave up 5 runs on 7 hits in 6 1/3 innings to be charged with the 8-4 loss while Ryan kept the Pale Hose off the scoreboard for 6 frames and got the win. Chris made 6 appearances for the White Sox, including 5 starts, going 1-1, 3.94. He had been injured for a good part of the season, only making 9 appearances in the minors, including 3 on a rehabilitation assignment with the AZL White Sox. With the Double A Birmingham Barons, he was 3-1, 1.56 prior to his call up.

On December 9, 2014, he was one of four players traded to the Oakland Athletics for pitchers Jeff Samardzija and Michael Ynoa. He began the 2015 season with the Triple A Nashville Sounds, getting the call to the majors on April 23rd. In 18 games (13 starts), he posted a respectable 3.56 ERA and 30/64 BB/K ratio despite a rough 1-6 record. He was felled by Tommy John surgery in the middle of 2016, making but 16 appearances from 2016 to 2018. He started the 2019 season on the injured list with a leg injury before crafting his finest big league work to date. In 28 games (25 starts), Bassitt had a 3.81 ERA and 1.19 WHIP, striking out 141 batters in 144 innings to the tune of a 10-5 record. He then followed that with another great year in 2020, even though it was abbreviated by the coronavirus pandemic. He was the American League Pitcher of the Month in September, when he went 3-0, 0.34 in 4 starts and finished the year at 5-2, 2.29 in 11 games, posting a 55/17 K/W ratio in 63 innings. He made a couple of starts in the postseason, winning Game 2 of the Wild Card Series against the Chicago White Sox when he gave up 1 run in 7 innings, and then having a no-decision in Game 1 of the Division Series against the Houston Astros when he allowed 3 runs in 4 innings, including a pair of homers.

He started the 2021 season where he had left off the year before. On May 27th, he pitched his first career complete game and shutout in defeating the Los Angeles Angels, 5-0, to improve his record to 5-2, matching his total from the previous, abbreviated, season. It also improved his record to 20-9 since the start of 2019. He was named an All-Star for the first time. On August 17th, in the 2nd inning of a start against the Chicago White Sox, he was hit in the face by a line drive off the bat of Brian Goodwin and had to be carted off the field. He was 12-3, 3.06 entering the game, but ended up being charged with the loss that day. While the pictures were scary, he was released from Rush University Medical Center in Chicago, IL the next day, although he was diagnosed with a fracture in his left cheek that would require surgery in the coming days, making his return date uncertain. He also had to receive stitches for lacerations, but escaped without an eye injury or a concussion. He was immediately placed on the injured list. The original outlook was that there was no way Bassitt would make it back to the mound before the end of the season, but he beat the odds and was reactivated on September 23rd, with the A's in a very tough five-team brawl for the two AL wild card spots. The A's had struggled without their ace, playing below .500, and it is likely that Bassitt would have taken things more easy had the season not been on the line. He pitched 3 scoreless innings in his return. He made two more starts, pitching a total of 6 1/3 innings and allowing just 1 run. He finished the year at 12-4, 3.15 with 159 strikeouts in 157 1/3 innings; he also led the American League in winning percentage.

Just after the settlement of the 2021-2022 lockout, on March 12, 2022, he was traded to the New York Mets in return for two minor leaguers, pitchers J.T. Ginn and Adam Oller. He had an excellent season for the Mets, going 15-9, 3.42 in 30 starts, while striking out 167 batters in 181 2/3 innings. However, he lost the decisive Game 3 of the Wild Card Series against the San Diego Padres on October 9th when he gave up 3 runs in 4 innings while three Padres pitchers, led by Joe Musgrove, combined to pitch a one-hit shutout. He became a free agent after the season, one of three members of the starting rotation that gave the Mets a 101-win season to leave that winter, alongside Jacob deGrom and Taijuan Walker. All three ended up with very lucrative contracts, with Chris signing with the Toronto Blue Jays on December 12th on a three-year deal worth $63 million.