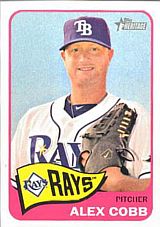 Cobb set his high school's strikeout record with 139 as a junior, then fanned another 139 as a senior. He also played quarterback and was a bat boy for the Los Angeles Dodgers during spring training for three years. He had a commitment to Clemson but was signed by the Tampa Bay Devil Rays and scout Kevin Elfering after they picked him in the 4th round of the 2006 amateur draft. He would be the fourth player fromt his Rays draft class to make the majors, after Evan Longoria, Josh Butler and Desmond Jennings. Alex allowed seven runs (five earned) in 8 2/3 innings and six games in his pro debut with the Princeton Devil Rays. With the 2007 Hudson Valley Renegades, he had a 5-6, 3.54 record. In 2008, the 20-year-old right-hander was 9-7 with a 3.29 ERA for the Columbus Catfish, finishing 8th in the South Atlantic League in ERA. Baseball America rated him the league's 16th best prospect, between Michael Taylor and Darin Holcomb. The next season, he had a 8-5, 3.03 record for the Charlotte Stone Crabs and limited right-handed batters to a .210 average. His ERA was 6th-best in the Florida State League. Cobb continued to improve, going 7-5 with a 2.71 ERA for the 2010 Montgomery Biscuits. He was third in the Southern League in strikeouts (128), first in K/9 ratio and 4th in ERA. Baseball America rated him the 19th best SL prospect, between Brent Morel and Jerry Sands. In the Arizona Fall League, he had a 1-3, 6.12 record for the Peoria Saguaros.

Cobb began 2011 with the Durham Bulls and was dominant (3-0, 2.25, 29 strikeouts in 22 innings). He was called up to the majors for a spot start on May 1st, replacing Jake McGee. He began his major league career by fanning Erick Aybar but Bobby Abreu followed with a double. Alex allowed four runs in 4 1/3 innings; two of them scored after Andy Sonnanstine allowed inherited runners home. After his spot start, he was sent back down as planned, his place on the roster being taken by Brandon Gomes. He earned his first win in his third major league start on June 7th against the Los Angeles Angels in Anaheim, giving up only one run over 6 1/3 innings in a 4-1 Rays win. He finished his first season with a record of 3-2, 3.42 in 9 starts, with 37 strikeouts in 52 2/3 innings. With Durham, he was 5-1, 1.87 in 12 starts. His season ended early when he felt discomfort in his right hand following a start on August 6th; he was diagnosed with a blood clot and underwent successful surgery at the Baylor University Medical Center in Dallas on August 18th. Cobb recovered to spend most of 2012 in the Rays' starting rotation. On August 23rd, he recorded his first major league shutout, a five-hitter, in a 5-0 win over the Oakland Athletics. It was his second career complete game and evened his record at 8-8. He finished the season with a record of 11-9, 4.03 in 23 starts, having pitched 136 1/3 innings while recording 106 strikeouts.

On May 10, 2013, Alex went on a strikeout binge in a start against the San Diego Padres. In the 4th inning, he became the second pitcher in Rays history, after Jeremy Hellickson, to strike out four batters in an inning, after Will Venable struck out but reached base on a wild pitch then stole second and third base in succession and scored on a balk. Cobb had 9 strikeouts after 3 innings, but left after 4 2/3 innings with his pitch count already at 117. He was trailing, 3-2, but managed 13 strikeouts, with 12 of the 14 outs he recorded coming via whiffs. It was the first time in major league history that a pitcher recorded that many strikeouts in under five innings; it was also the first time in 34 games that a starter for the Rays failed to complete five innings. The Rays came back to win, 6-3, and all he got for his effort was a no-decision. The relievers who succeeded him recorded five more strikeouts, for a total of 18. On June 15th, he was struck on the head by a line drive off the bat of Eric Hosmer of the Kansas City Royals and had to be taken off the field on a stretcher; luckily, he suffered only a mild concussion, but the hit cost him a win, as the Rays were ahead, 3-2, with an out in the 5th and reliever Alex Torres was gifted with the decision. He returned to the mound exactly two months later, on August 15th, pitching 5 innings and earning credit for a 7-1 win over the Seattle Mariners. He pitched one of the best games of his career in a key situation on September 21st, taking a shutout into the 9th inning and striking out 12 in a 5-1 win over the Baltimore Orioles; he was removed with one out in the 9th, after left fielder David DeJesus misplayed a routine fly ball by Chris Davis into a triple and Adam Jones followed with a single, letting Fernando Rodney finish the game which consolidated Tampa's lead in the wild card standings. In his next start, against the New York Yankees on September 26th, he pitched 7 scoreless innings to lead the Rays to a 4-0 win that reduced their magic number to secure a wild card slot to just 2. After the Rays clinched the spot, thanks to winning a one-game playoff with the Texas Rangers, he started and won the American League Wild Card Game on the road against the Cleveland Indians on October 2nd. He gave up no runs on 8 hits in 6 2/3 innings before the bullpen completed a 4-0 shutout. Overall, Cobb had his finest season, going 11-3, 2.76 with 136 strikeouts in 22 starts.

On September 11, 2014, facing the New York Yankees at New Yankee Stadium, Cobb carried a bid for a no-hitter into the 8th inning before it was spoiled by Chris Young hitting a one-out double. He left the game with a 4-0 lead, but everything unraveled, as his successor, Brad Boxberger, allowed a pinch-hit two-run homer to Martin Prado. He earned a no-decision for his brilliant effort when Young struck again in the 9th, with a game-ending three-run homer against Jake McGee for a 5-4 Yankees win. He ended the season at 10-9, 2.87, in 27 starts and 166 1/3 innings pitched, both career highs. Penciled in to be the Rays' Opening Day starter in 2015, he was prevented from taking the mound in what was described as a battle with tendinitis. It was, in fact, a partially torn ligament in his elbow, and on May 8th, he underwent Tommy John surgery, not pitching in the bigs at all. He only made his return to the majors on September 2, 2016, starting a game at home against the Toronto Blue Jays. He gave up a pair of runs in the 1st, then settled down nicely, not allowing anything else over the next four innings and ending up with 7 strikeouts and only a walk in a no-decision. The next few outings were rougher, and he finished the year at 1-2, 8.59 in 5 starts. He bounced back with a very solid season in 2017, making 29 starts with a record of 12-10, 3.66, He also pitched 179 1/ 3 innings, a very good total in an era where starters who piled up a lot of innings were at a premium.

Given his solid 2017, Cobb expected to be in high demand when he became a free agent, but it was not the case. He sat on the sidelines for almost all of spring training and did not reach a deal until March 21, 2018, when the Baltimore Orioles signed him to a four-year deal worth $57 million. He had a very disappointing season, going 5-15, 4.90 in 28 starts for the last place team who had the worst season in franchise history. The Orioles cleaned house in midseason, but Cobb stayed put and, the following spring, he was tabbed the Birds' Opening Day starter for 2019. He had to skip the assignment, as he was felled by a groin injury, and started the year on the injured list. He had a solid start against the New York Yankees on April 4th, then, after missing some more time, he was beaten up by the Minnesota Twins in back-to-back starts on April 20th and April 26th. He allowed three long balls in the first and four in the second, for a total of 14 earned runs in 6 2/3 innings, losing both games. He returned to the injured list on April 28th with a lumbar strain and did not pitch again that season. In 2020, he made 10 starts, which was almost a complete season given the Orioles only played 60 games due to the COVID-19 pandemic. Even though his record was only 2-5, it was the best of his three seasons with the Birds as his ERA was 4.30, good for an ERA+ of 106, and his other numbers were also decent. However, after the season, the Orioles decided that they should trade him before he hit free agency in a year's time and on February 2, 2021, they sent him to the Los Angeles Angels in return for young IF Jahmai Jones.