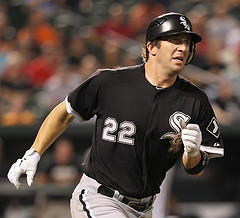 Third baseman Brent Morel attended Cal Poly San Luis Obispo, where he hit .333 with 17 doubles, 5 home runs, and 31 RBIs as a sophomore. After hitting .386 with 8 homers and 60 RBI as a junior, he was selected by the Chicago White Sox in the third round of the 2008 amateur draft. He was signed by scouts Gary Woods and Derek Valenzuela and made his pro debut that summmer. He batted .318 with 6 home runs in 60 games, split between the Great Falls Voyagers and the Kannapolis Intimidators. With the Winston-Salem Dash in 2009, Morel hit .281 with 33 doubles, 16 homers, and 79 RBI and was named a Carolina League All-Star.

Morel began 2010 with the AA Birmingham Barons and hit .326 in 49 games before being promoted to the AAA Charlotte Knights in early June. With the Knights, he hit .320 with 8 homers in 81 games. He was called up by Chicago in September, making his big league debut on September 7th as a pinch-hitter against the Detroit Tigers. Three days later, he recorded his first hit in the majors, a home run off Bruce Chen of the Kansas City Royals. He started the team's final 17 games at third and recorded hits in the season's last 6 games. Overall, he hit .231 with 3 homers in 21 games with the Sox.