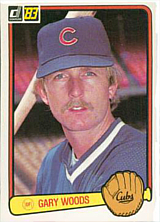 Woods reached the major leagues in 1976 with the Oakland Athletics, who had signed him as an amateur free agent in 1973. He went 1 for 8, then was selected by the Toronto Blue Jays in the expansion draft that November. He got some significant playing time as a rookie outfielder for the Jays in their inaugural season in 1977, when he hit .216 with no homers and 17 RBI in 60 games. He was the team's Opening Day center fielder and shared playing time in the outfield with Al Woods, who was not related. He only played 8 games with the Jays in 1978, hitting .158, then did not come back to the majors until the 1980 season as a member of the Houston Astros. He only joined the team on September 1 that year, but was outstanding that month, hitting .377 with his first 2 major league homers as the Astros fought off the Los Angeles Dodgers to win the first division title in team history. He was added to the team's roster for the 1980 National League Championship Series against the Philadelphia Phillies, and in Game 4, played on October 11, he started in right field and batted cleanup for Houston. In one of the many controversial plays in that highly entertaining game, he was called out on appeal for leaving his base early on a sacrifice fly by Enos Cabell in the 4th.

After falling back to earth with a .209 average for the Astros in 1981, he settled down with four seasons with the Chicago Cubs from 1982 to 1985. He was a backup outfielder, pinch-hitter and occasional second baseman those years, taking part in the 1984 NLCS in which the Cubs were defeated in five games by the San Diego Padres, going 0 for 1. Overall, he played, 525 games in the majors, hitting .243 with 13 homers and 110 RBI.

Woods later scouted for the Chicago White Sox in California. He was a friend of White Sox manager Robin Ventura and was still scouting actively when he passed away unexpectedly in 2015 at the age of 61.