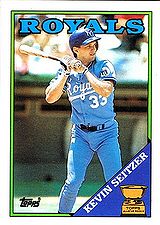 Kevin Seitzer was signed as an 11th round pick in the 1983 amateur draft by the Kansas City Royals and scout Art Stewart. When he first came up and had a tremendous rookie year in 1987, he was seen as a potential successor to George Brett as the cornerstone of the franchise, but his hitting after that, while decent, never reached those early levels again.