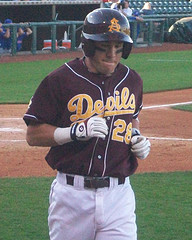 Jason Kipnis made his major league debut with the Cleveland Indians in 2011 and quickly established himself as one of the top second basemen in baseball.

Kipnis was his high school's baseball team and football team captain at Glenbrook North High School in Northbrook, IL, in the Chicago suburbs, setting school records in receptions, yards receiving, touchdowns and homers. He hit .455 with 11 homers and 36 RBI as a junior and .520 with 8 homers and 36 steals as a senior. He was All-State as a senior.

As a redshirt freshman at the University of Kentucky in 2007, Kipnis hit .337 and slugged .654. Transferring to Arizona State University, he batted .371/.485/.667 in 2008 with 76 runs and 73 RBI in 62 games, while stealing 24 bases in 28 tries. He was named first-team All-Pacific-10 Conference and was named the Pac-10 Newcomer of the Year. He led the Pac-10 with six triples and was 8th in average, right behind first-rounder Jason Castro. The American Baseball Coaches Association named him second-team All-American in the outfield and Baseball America picked him third-team. The San Diego Padres chose him in the 4th round of the 2008 amateur draft but he did not sign. He put up a .264/.364/.350 line for the Cotuit Kettleers of the Cape Cod League that summer.

His junior year, Kipnis was better yet. He produced at a .385/.496/.729 rate with 76 runs, 71 RBI and 27 steals in 33 tries. He was a consensus All-American flyhawk. He also was named Player of the Year in the Pac-10, one of college baseball's top conferences. He had led the Pac-10 in steals, runs, hits (91) and doubles (21, tied) while placing second in average to Dillon Baird. The Cleveland Indians selected him in the second round of the 2009 amateur draft, the 63rd overall pick. He signed for a $575,000 bonus. He was Cleveland's second choice in the draft, following Alex White in round one. The scout was Byron Ewing.

Jason began his pro career with a .306/.388/.459 campaign for the Mahoning Valley Scrappers in 2009, with error-free play in the field. He only hit one homer in 29 games and stole 3 bases in six tries, the big drawbacks. Baseball America rated him as the New York-Penn League's #5 prospect, second behind Ryan Westmoreland among outfielders, and as the #10 Indians prospect.

He then started 2011 with the Columbus Clippers of the AAA International League. In 91 games there, he hit .279, with 15 doubles, 9 triples and 12 homers; he was second in the circuit with 64 runs scored. He made a splash at the 2011 Futures Game: as the leadoff batter for the United States team, he homered off Julio Teheran to put his team up, 1-0. On July 22nd, the Indians called him up to the big club, optioning Luis Valbuena to Columbus to make room for him on the roster. There was speculation that the Indians would trade veteran Orlando Cabrera at the trading deadline if Kipnis proved able to handle second base on a full-time basis during his first 10 days on the shores of Lake Erie, which is exactly what happened. In his debut, Jason went 0 for 2 with a hit by pitch as the Indians lost 3-0 to Gavin Floyd and the Chicago White Sox. He made his first career hit count, singling off the Los Angeles Angels' Hisanori Takahashi in the bottom of the 9th on July 25th to give the Indians a walk-off 3-2 win; it was also his first career RBI. Still, he was off to a slow start at the plate until hitting his first homer on July 31st off Danny Duffy of the Kansas City Royals. He then homered in his next three games, showing why scouts had been raving about his bat for a while. On August 6th, he hit a two-run homer in the 9th inning off Yoshinori Tateyama of the Texas Rangers, as the Indians rode a 4-run inning to a 7-5 win over the Rangers, then on August 10th, he had his first five-hit game in the majors, also scoring four runs and raising his average to .356. The fairy-tale season hit a snag on August 18th when Kipnis injured his right hamstring warming up minutes before a game with the White Sox. The Indians called Valbuena back from AAA to replace him on the roster. Kipnis ended up hitting .272 with 7 homers in 36 games.

Kipnis then spent the entire 2012 season in the majors, playing 152 games as the Indians' regular second baseman. He hit .257/.335/.379 with 14 homers and 76 RBI, scoring 86 runs and stealing 31 bases in 38 attempts. While his season went a bit under the radar given that Cleveland was never involved in the pennant race, those were solid numbers all around for a young player in his first full season. In 2013, he took a big step forward, though, and began to draw attention once again. He was named the American League's Player of the Month for June after batting .419 with 12 doubles, 4 home runs, 25 RBI and 17 runs scored, while drawing 30 walks and reaching base in every game he played. With half of the season still to go, he had already matched his career high for doubles - 22 - and was just two homers shy of his previous year's total. It took such a superlative all-around performance to beat out the Baltimore Orioles' Chris Davis, who had 12 homers and 30 RBI during the month. A few days later, he added another honor, being named a member of the AL All-Star team. He finished the year with a .284 average, 36 doubles and 17 homers in 149 games. he scored 86 runs and drove in 84 as the Indians reached the postseason. He went 0 for 4 in the Wild Card Game, however, but still finished in 11th place in the MVP voting, having established himself as an emerging star.

In 2014, Kipnis suffered an abdominal strain while swinging in a game on April 29th and had to go on the disabled list for a month. He was hitting .234 with 3 homers at the time of the injury and did not come back until May 28th as the Indians struggled in his absence. While he did end up playing 129 games, he was never fully right and his batting average fell to .240, with 6 homers and 41 RBIs. The health issues carried over into the offseason, as he hurt his ring finger working out with weights at home and damaged a tendon, requiring surgery in December. There was fear that the injury would interfere with his ability to swing a bat in spring training, however.

Kipnis began the 2015 season slowly, hitting .218 in April, but then went on a tear as he was named the American League Player of the Month for May. During the month, he hit .429 with 15 doubles, 3 triples and 4 home runs, scored 30 runs and drove in 17. It was his second time winning the award. He continued his hot hitting in June as he extended a hitting streak to 20 games on June 26th.