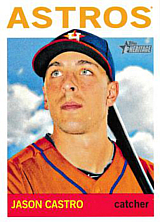 Catcher Jason Castro was the first Houston Astros All-Star in their American League affiliation, making the game in his finest season, 2013.

Castro hit .400/.486/.611 in high school. He was drafted in the 43rd round of the 2005 amateur draft by the Boston Red Sox. Opting to attend Stanford University instead, he hit .283/.363/.396 as a freshman and fielded .993, mostly at first base. He made All-Alaska Baseball League with the Anchorage Bucs, then had a college sophomore slump to .167/.287/.225 in 2007. He really lifted his stock in the summer of 2007 with the Yarmouth-Dennis Red Sox, helping them take the Cape Cod Baseball League title. He hit .341/.434/.488 with 22 walks and 31 runs scored in 39 games bouncing between first base, outfield and catcher. He was second in the league in both runs and average (trailing Conor Gillaspie), earning All-League honors. As a junior, Castro whomped pitching to a .379/.431/.617 line with 64 runs scored and 69 RBI. He led the Pac-10 with 105 hits and was 7th in average. He made All-Conference at catcher, one of three backstops picked (Petey Paramore was another), and made the 2008 College World Series All-Tournament Team.

Jason was selected in the 1st round (10th overall) of the 2008 amateur draft by the Houston Astros, between fellow future All-Stars Aaron Crow and Justin Smoak. He was the third catcher selected after Buster Posey and Kyle Skipworth; no other catchers were taken in the first 75 picks. Jason was signed by scout Joe Graham and scouting director Bobby Heck for a $2,070,000 bonus. He made his pro debut that summer with the Tri-City Valley Cats of the New York-Penn League, hitting .275/.381/.384. Baseball America rated him the league's top prospect, followed by David Cooper. That winter, he batted .333 for the North Shore Honu, making the Hawaii Winter Baseball All-Star team. He tied for 5th in the league in average, .005 behind Posey, and made the All-Star team at catcher (Posey was picked as a utility man). The youngest player invited to Astros spring training in 2009, he split the year between the Lancaster Jethawks and Corpus Christi Hooks and hit a combined .300 with 10 home runs and 73 RBI while throwing out 45% of attempted base-stealers. Baseball America rated him the California League's third-best prospect, after Posey and Christian Friedrich, and at 6th in the Texas League behind Mat Latos, Smoak, Chris Carter, Jhoulys Chacin and Brett Wallace. He did not have the best year of an Astros minor league catcher, though - that honor went to .341-hitting Koby Clemens.

Castro backed up Tyler Flowers at catcher for the USA in the 2009 Futures Game. He had the USA's big hit in a 7-5 loss; coming up in the 5th with Scott Sizemore and Daryl Jones aboard, he went yard off Luis Pérez. He later flew out against Juan Carlos Sulbaran. Defensively, he allowed one steal to Luis Durango but later threw out Durango. In the 2009 Baseball World Cup, Jason had one of the worst performances for Team USA, going 3 for 23 (all singles) with 5 walks. He also made a defensive gaffe on a Lino Connell bunt that helped hand the USA its lone loss, 9-7, to Venezuela, in the opener. By the Gold Medal game, he was riding the pine as Lucas May was the catcher. He hit only .143 in 42 at-bats for the Peoria Saguaros of the Arizona Fall League that year, second among the league's two Castros, well behind Starlin Castro's .376.

Jason again was the youngest player in Houston's spring training camp in 2010. He began the year with the AAA Round Rock Express, hitting .265/.365/.355 in 57 games, before being called up in June. Jason made his big league debut on June 22nd, going 1-for-4 in a game against the San Francisco Giants with a single off Tim Lincecum. He was immediately installed as the team's regular catcher. In 67 games, Jason hit .205/.286/.287 with 2 home runs. He then missed the entire 2011 season after having surgery on his right knee in spring training. He got more bad news the following December, having to undergo another round of surgery, this time to remove a bone in his left foot, the result of an injury suffered in the Arizona Fall League a few weeks earlier. He missed the start of spring training in 2012, but was ready for the start of the season. He spent the entire year with the Astros, except for a month from mid-July to mid-August with a resurgence of his knee problem. He played 87 games, hitting .257/.334/.401 with 6 homers and 29 RBI as the team's primary catcher.

After the 2016 season, the Astros acquired veteran catcher Brian McCann in a trade with the Yankees, indicating that they would not make an effort to re-sign Castro, who was now a free agent. On [November 22]]nd, Jason signed a three-year deal with the Minnesota Twins for $24.5 million. There, he would compete for the starting job on a rebuilding team. But, as it turned out, the Twins' rebuilding went much quicker than anticipated, reaching the postseason in 2017. Jason was a contributor as the team's starting catcher, playing 110 games and hitting .242/.333/.388 with 10 homers and 47 RBI. It was his work behind the plate, handling an unstable staff, that was key, with the Twins burning through dozens of arms in the hope of putting together some semblance of reliability while maintaining a winning record. Jason went 0-for-3 in the Twins' loss to the Yankees in the Wild Card Game. He was off to a slow start in 2018, hitting just .143/.257/.238 in 19 games, when his season was ended by a tear in his meniscus. Further tests indicated that rest would not be enough and that he needed season-ending surgery. He came back in 2019 and shared catching duties with Mitch Garver, playing 79 games and hitting .232/.332/.435 with 13 home runs and 30 RBI. It may have been a coincidence, but after a poor season in 2018, the Twins bounced back to claim a division title and win over 100 games, setting a record for most homers hit in the process. He only played one game in the postseason, as he had been usurped by Garver, the AL Silver Slugger for catcher. The Twins were, naturally, swept by the Yankees in the Division Series, and Jason did not appear in any games.

Castro became a free agent following the 2019 season and, on January 2, 2020, he signed a one-year deal with the Los Angeles Angels worth $6.85 million. He hit just .182 in 18 games for the Angels in the delayed season, and with the team in last place, on August 30th he was dealt to the San Diego Padres in return for P Gerardo Reyes. The Padres were playing well and looking to end a 14-season postseason drought, but had received almost no production on offense from their two main catchers, Austin Hedges and Francisco Mejia. That same day, they also acquired Austin Nola from the Seattle Mariners, and the two were expected to share catching chores the rest of the way.