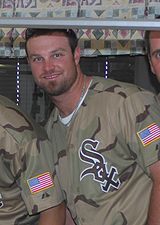 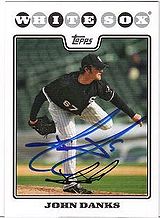 The brother of Jordan Danks, John Danks is a pitcher who spent ten seasons with the Chicago White Sox.

John Danks was 10-3 with a 1.61 ERA and two saves as a high school senior. He struck out 173 and walked 27 in 100 innings while walking 59. Baseball America named him to their High School All-America second team pitching staff. The Texas Rangers took him as the 9th overall pick of the 2003 amateur draft. The fourth pitcher selected, he was taken after Kyle Sleeth, Tim Stauffer and Paul Maholm. Danks was signed by scout Randy Taylor and made his pro debut that summer.

In 2004, the teen was 3-2 with a 2.17 ERA for the Clinton Lumber Kings (64 K in 49 2/3 IP, .202 opponent average) and the Stockton Ports (1-2, 5.24). He was rated the #9 left-handed starting prospect by Baseball America, second among teenagers. The publication also rated him the #4 prospect in the Midwest League (right ahead of Brandon Wood) and #11 in the California League (sandwiched between Jeff Salazar and Steven Shell). Danks was picked for the USA team in the 2004 Futures Game and emerged as the winning pitcher, allowing two hits in one inning and striking out one as the club's third hurler. Danks was deemed to be part of the DVD (Thomas Diamond, Edison Volquez, and Danks) trio of pitching prospects.

John again had a tale of two teams in 2005 - he was 3-3 with a 2.50 ERA for the Bakersfield Blaze, averaging close to a strikeout per inning. With the Frisco RoughRiders, though, he was 4-10 with a 5.49 ERA, allowing a .297 opponent average (.322 by right-handers, .222 by left-handers). Overall, he led Rangers minor leaguers in losses. Baseball America rated Danks as the #11 prospect in both the California League and the Texas League (behind Jason Hirsh and Justin Huber). 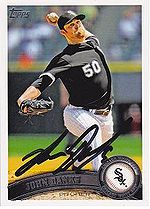 After the 2006 campaign, Texas traded Danks and Nick Masset to the Chicago White Sox for Brandon McCarthy. The deal got mixed reviews from both sides, some feeling it was a steal for either Chicago or for Texas. Danks earned a spot in the White Sox rotation in Spring Training 2007 and made his big league debut on April 8th, giving up 3 runs in 6 innings in a losing start against the Minnesota Twins. In the season's first half, he went 5-6 with a 4.62 ERA, but he struggled in the second half, going 1-7 with a 7.11 ERA. He improved significantly thereafter, putting up three excellent seasons in a row over the next three years. In 2008, he was 12-9, 3.32 as the White Sox won the AL Central. He was outstanding in the season's most important game, throwing 8 shutout innings while giving up only 2 hits on September 30th as the Sox beat the Minnesota Twins, 1-0, in the one-game playoff to determine the division winner; he also beat the Tampa Bay Rays in his only start of the ALDS. He was 5th in the 2008 AL in ERA (between Jon Lester and Mike Mussina).

In 2011, Danks struggled badly in the early going. After 11 starts, he was 0-8 with a 5.25 ERA. He managed to right the ship afterwards and finished 8-12, 4.33, although his early struggles meant the Sox were never in the race for a division title. The team was uncertain whether to trade him or re-sign him after the season, but since they were not satisfied with what was available in return for the durable young starter in a trade, they decided to give him a multi-year contract extension. On December 22nd, it was announced that Danks had agreed to stay in Chicago for the next five years, at a total cost of $65 million.

The first year of that contract was almost a total write-off however. In 2012, he made only 9 starts, with a 3-4 record and a 5.70 ERA. He underwent surgery on his throwing shoulder on August 6th, officially ending his season, having already been on the sidelines since May 19th, when he first experienced pain. He tried rest and even made a minor league rehabilitation start, but had to face the inevitability of going under the knife. Thus, the highlight of his season was seeing his brother Jordan reach the major leagues as a spare outfielder for the Pale Hose, although John was already on the sidelines by the time Jordan made his debut. He made 22 starts for the Sox in 2013, but the results were poor - a 4-14 record with a 4.75 ERA.

In 2014, he evened his record at 11-11, but his ERA was still a high 4.74 in 32 starts. He did pitch 193 2/3 innings, however. In 2015, however, he lowered his ERA slightly, to 4.71, but his record fell to 7-15. His main quality was his durability as he made another 30 starts and logged 177 2/3 innings. He was back in the White Sox's starting rotation in 2016 and this time the team was highly competitive, in contrast to the previous few seasons. However, he was the weak link in the starting rotation losing his first four starts with an ERA of 7.15, and on May 5th, he was designated for assignment, ending a ten-year tenure in Chicago during which he had gone 79-104. He never returned to the majors after that.