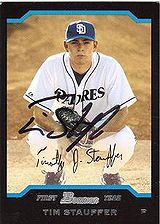 Tim Stauffer was drafted by the Baltimore Orioles in the 36th round of the 2000 amateur draft, but headed on to college. He was then drafted by the San Diego Padres in the 1st round of the 2003 amateur draft. Scouted by Tripp Keister, he was originally offered $2.6 million as the 4th overall pick in the draft. But an MRI revealed weakness in his shoulder and Stauffer settled for $750,000 in August. He made his pro debut the next summer.