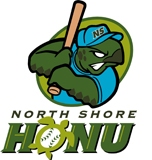 The North Shore Honu are members of the Hawaii Winter League. They joined the league during it's rebirth in 2006. The club is named after a Hawaiian word for the sea turtle. In their first season the team finished 18-17 to win the west division and beat the Waikiki Beach Boys for the league title.