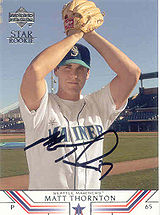 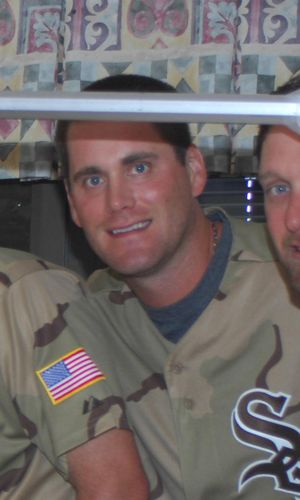 Thornton was selected by the Seattle Mariners in the 1st round of the 1998 amateur draft. He was signed by scout Ken Madeja and made his pro debut that year. He recored his first career save for the Wisconsin Timber Rattlers the next season and was named the Mariners' Minor League Pitcher of the Year and California League Pitcher of the Year in 2001 after posting career bests in wins (14), strikeouts (192), and starts (27). However, during his time in the minors, he struggled with elbow injuries, missing most of his first season and later sitting out most of 2002 and part of 2003.

He made his big league debut in 2004 and spent the entire 2005 season as a member of the Mariners bullpen. Prior to the 2006 season, he was traded to the Chicago White Sox for outfielder Joe Borchard. He has been a member of the team's bullpen ever since, working as a LOOGY and set-up man. He did especially well in this role in the White Sox's run to an unexpected division title in 2008, putting up an ERA of 2.67 (a 171 ERA+) in 67 1/3 relief innings; he also struck out 77 batters while walking only 19. Although not well-known by the general public, his solid performance was noticed by the bosses of Team USA, who added him to the roster for the 2009 World Baseball Classic after better-known relievers such as B.J. Ryan, Joe Nathan and Brian Fuentes pulled out at the last moment.

Thornton was traded to the Boston Red Sox on July 12, 2013 in return for minor league OF Brandon Jacobs. That put an end to a 10-season run with the White Sox during which he appeared in 512 games - all in relief - the 4th-most in team history after Red Faber, Ted Lyons and Wilbur Wood. He was charged with a loss in his first appearance for the BoSox on July 14th, after he came in with the score tied, 2-2, in the bottom of the 11th and walked pinch-hitter Chris Young to lead off the inning, then allowed the game-winning hit to Josh Donaldson with two outs. He made 20 appearances with the Red Sox, putting up a 3.52 ERA in 15 1/3 innings; however, he did not pitch in the postseason as the Red Sox became World Champions. A free agent after the season, he signed a two-year contract with the New York Yankees on December 17th, being slated to replace Boone Logan as the team's main lefty reliever. However, he pitched only 46 times with the Yankees, with an 0-3 record but a solid 2.55 ERA in 24 2/3 innings, then was placed on waivers on August 5th. The Washington Nationals claimed him and he made 18 appearances for them without allowing a run in 11 1/3 innings. His good performance down the stretch explains why he was used three times in the postseason, including in a key situation in Game 4 of the NLDS against the San Francisco Giants on October 7th, when he came in to pitch the bottom of the 7th after the Nats had just managed to tie the score at 2-2. Things did not work out this time, though, as after one out, he gave up back-to-back singles to Joe Panik and Buster Posey and gave way to Aaron Barrett, who allowed Panik to score the go-ahead run. The game ended on that 3-2 score, Matt was charged with the loss, and the Nationals were eliminated from the postseason while manager Matt Williams faced questions on why he had used two of his lesser relievers with so much at stake.

He returned to Washington in 2015 and had a very solid season in his familiar role of set-up man. He pitched 60 times in relief with a record of 2-1, but most impressive was his ERA of 2.18 and 18 holds in 19 opportunities. He became a free agent after the season but it took him a while to hook up with a team, finally signing on March 3, 2016 with the San Diego Padres, having to settle for a minor league contract.