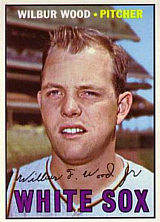 One of the few knuckleballing left-handers, Wilbur Wood was one of the great workhorses of the 1970s, hurling more than 290 innings each year from 1971 to 1975 for the Chicago White Sox. In 1972, Wood made 49 starts in a season shortened by a work stoppage. In a full season, Wood easily would have made 51 or 52 starts. Interestingly, Ed Herrmann was the starting catcher for all of Wood's starts in 1972; Herrmann was particularly adept at catching the knuckleball, and the 49 starts by a battery that year are the most in the 20th century. One has to go back to the 1884 Baltimore Orioles to find a higher total, with Hardie Henderson and Sam Trott making up the tandem.

Wood originally came up with the 1961 Boston Red Sox, the same year that Carl Yastrzemski came up. Wood was 19 at the time, two years younger than Yaz. He made his first baseball card appearance in the 1964 Topps set.