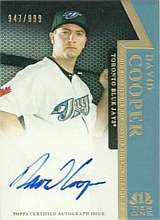 Cooper hit .529 as a high school sophomore in 2003. He played well for the US in the 2004 World Junior Championship, batting .316. His six runs scored tied Andrew McCutchen for second behind Justin Upton for the 4th-place team. As a junior, he batted .463, then hit .529 with 13 home runs as a senior in 2005. Baseball America named him a third-team high school All-American at first base. He was not drafted due to his strong college commitment and hit .305/.337/.404 as a freshman at Cal State Fullerton. He was superb in the 2006 College World Series, hitting .533 to lead the event. His 7 straight hits tied Terry Francona for third on the College World Series record list, one behind Dave Magadan and Barry Bonds. In the 2006 Cape Cod League, Cooper hit .304 for the Brewster Whitecaps. Transferring to Cal, David improved to .382/.450/.627 as a sophomore. He was third in the Pac-10 in average, 5th in OBP and 5th in slugging. Cooper was one of three players to split All-Conference honors at first base; Brett Wallace was one of the others. In the 2007 Cape Cod League, David hit .284 for Brewster.

Cooper showed major strides in power hitting in 2008 and was chosen 17th overall in the 2008 amateur draft by Toronto. It was the third-highest a California Bears player had ever been drafted. He signed with scout Chris Becerra for $1.5 million and debuted on June 17, going 0 for 3 with a walk, run scored and RBI for the Auburn Doubledays against the Batavia Muckdogs. He played for three teams that first season - Auburn, Lansing and Dunedin, batting .333/.399/.502 in 69 games. He was sent to the AA New Hampshire Fisher Cats in 2009, but fell to .258, although he did hit 32 doubles and 10 homers while driving in 66 runs in 128 games. Back at New Hampshire in 2010, his average remained pretty much the same - .257 - but his power numbers improved with 30 doubles and 20 homers in 132 games. He played exclusively at first base during those first three seasons.

David started 2011 with the Las Vegas 51s of the Pacific Coast League. He was hitting .395 in 20 games when he got the call to Toronto to replace Travis Snider, sent down because of a prolonged hitting slump. He got his first hit on May 1 at DH while playing the New York Yankees, but otherwise started his major league career in a deep slump, going only 2-for-17 over his first 5 games. He came out of his funk in a big way on May 10th. Coming into a game against the Boston Red Sox in the 6th inning as a pinch runner after Yunel Escobar was hit by a pitch, he hit his first homer off Daniel Bard in the 8th to give the Jays a short-lived lead, then drove the game's winning run home in the 10th on a sacrifice fly. He was sent back to the minors on May 15th, having hit .121 in 13 games. He continued to hit well at Las Vegas, winning the PCL batting title with a .364 average in 120 games, coupled with a league-high 51 doubles (but only 9 homers); he lost All-Star honors at first base to Bryan LaHair. He was called back to Toronto in September and hit his second homer on September 11th off the Baltimore Orioles' Tommy Hunter. He finished the year batting .211/.284/.394 in 27 games.

Cooper started 2012 back at Las Vegas, where he hit .314 with 27 doubles and 10 homers in 68 games, driving in 52. He was called up to Toronto when the starter at first base, Adam Lind, struggled badly and was sent down to work on his hitting stroke. Cooper spent from May 25th to June 24th in Toronto, hitting .292 in 24 games. He came back on July 30th when Lind was placed on the disabled list with a bad back and continued to hit well. Keeping his flair for the dramatic, he hit a pair of 9th-inning homers in close games, on August 4th against the Oakland Athletics and August 8th against the Tampa Bay Rays. On August 13th, he drove in the winning run in the bottom of the 11th to give the Jays a 3-2 win over the Chicago White Sox. Overall, he played 45 games for the Jays, hitting .300/.324/.464 with 4 homers and 11 RBI. His season (and big league career) ended on August 22 when he sustained a back injury diving into first base on a pick-off attempt against the Detroit Tigers.

When spring training rolled around in 2013, Cooper was still not healed. So on March 13th, the Jays simply released him. He underwent surgery on two vertebrae which were fused together with a titanium plate. He only signed with the Cleveland Indians on August 13, hitting .440 in 6 games for the AZL Indians but only .192 for the AAA Columbus Clippers. The Indians let him go at the end of August, only to sign him back in December. He was in spring training in 2014 but was given his walking papers on March 2, in order to clear room on the 40-man roster for the recently-acquired Justin Sellers, who had a shot at making the Opening Day roster, while Cooper did not. He spent 2014 with the Columbus Clippers, then split his final season, 2015, between the independent Lancaster Barnstormers and two weeks in the New York Mets system.