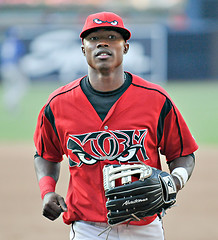 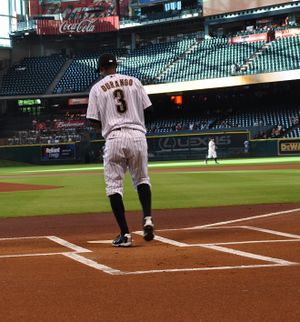 Durango with Houston in 2011

Luis continued to star in 2006, batting .378/.470/.448 with 35 runs in 39 games for the AZL Padres. His baserunning improved, with 17 steals in 23 attempts. He led the Arizona League in both average and OBP and made the AZL All-Star team, joining Carlos Peguero and Cedric Hunter in the outfield. He helped lead the Padres to the league championship. Baseball America named him as the #13 prospect in the circuit.

Durango hit .367/.422/.460 for the 2007 Eugene Emeralds with 60 runs in 69 games. Despite going only 17-for-27 in steals, Baseball America named him the fastest baserunner in the Padres chain. He led the Northwest League in average (by .029), triples (8, tied with Tony Thomas) and hits (110, a team record), was 3rd in OBP and runs and tied for 4th in steals. He turned four double plays, tied for the lead among NWL outfielders. He made the NWL All-Star team and was named the league MVP (splitting honors with Matt Downs). Despite his performance, Baseball America did not name him as one of the top 20 prospects in the NWL.

He was Panama's big star in the event, going 3 for 5 with two walks and a steal out of the leadoff slot, easily outproducing major leaguers Carlos Lee, Ruben Rivera, Angel Chavez and Julio Zuleta (a combined 3 for 29). Durango was second in the 2009 Classic in average (behind Brett Roneberg) and OBP (behind Jason Bay).

Durango hit .281/.390/.309 for the 2009 San Antonio Missions and stole 44 bases in 61 tries. He finished second in the Texas League in stolen bases, third in OBP behind Chris Carter and Craig Cooper and second in walks (81, one behind Cooper).

He made his major league debut with the Padres after a late-season call-up in 2009. Durango debuted as a pinch-hitter for Luke Gregerson; trying for a bunt hit against Danny Haren, he was retired. The next day, Luis got his first hit, a bunt single off Doug Davis. Later in the game, he scored the game-winner in the bottom of the 10th, capping a three-hit contest in his first MLB start.