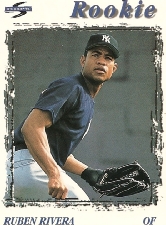 Rubén Rivera, once considered a promising prospect, toiled in the majors for parts of seven seasons without coming close to filling expectations. His prospect lustre long gone, Rivera's very career began a gradual decline to obscurity when he was released from the New York Yankees in spring 2002 after stealing and selling Derek Jeter's glove.

In the 2003 Baseball World Cup, Rivera hit .324/.422/.595 with 9 RBI in 10 games as the center fielder for Panama. Panama won its first Silver Medal in Baseball World Cup history and Rivera was named to the tournament All-Star team, joining Frederich Cepeda and Takashi Yoshiura as the outfielders selected.

With the San Francisco Giants he was involved in some bad baserunning in which announcer Jon Miller referred to as "the worst baserunning in the history of the game."

He spent the 2006 season with the Chicago White Sox Triple-A team; each subsequent season (through 2011) was spent in the Mexican League.

He is a cousin of Mariano Rivera; the two were teammates on the Yankees in 1995 and 1996. He was once traded for Hideki Irabu, who was refusing to play for the San Diego Padres, who held his major league rights. He was signed by the Yankees for $3,070. $3000 was a signing bonus and $70 was repayment for missing a day of work on a fishing boat.

Rivera was 0 for 6 with a walk and two strikeouts for Panama in the 2009 World Baseball Classic.