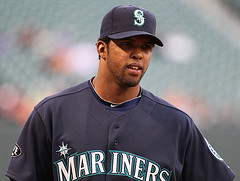 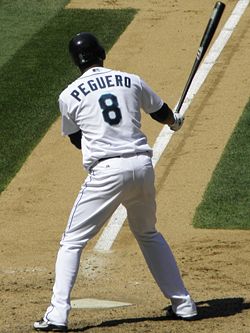 Outfielder Carlos Peguero made his major league debut in 2011.

Peguero was signed by scout Patrick Guerrero for the Seattle Mariners in January 2005 at age 17. He hit .251 for the 2005 DSL Mariners. Coming stateside in 2006, he hit .313/.380/.649 for the AZL Mariners and .204/.221/.333 for the Everett AquaSox. Despite only playing part of the season there, he led the Arizona League in slugging, tied for the most home runs (with 7, same as two other players), tied for second in triples (7, two behind Scott Lucas) and was second with 24 extra-base hits (one behind leader John Alonso. He made the AZL All-Star outfield alongside Luis Durango and Cedric Hunter. Peguero was rated the #18 prospect in the AZL by Baseball America, between Nick Van Stratten and Warner Madrigal.

Peguero returned to High Desert in 2009 and improved to .271/.335/.560 with 14 triples, 31 home runs, 92 runs and 98 RBI. His walk total improved to 42 but he whiffed 172 times. Peguero led the California League in two negatives - strikeouts and outfield errors (14). He was four home runs behind league leader Jon Gaston. Among all players in the affiliated minors, he tied for third in triples (even with Peter Bourjos, Tyson Gillies and Trent Oeltjen), tied Grant Desme for 5th in homers (finishimg second in the Cal League in both areas) and tied Brock Kjeldgaard for 4th in strikeouts, 19 behind fellow M's farmhand Greg Halman. He led Mariners minor leaguers in triples (tied with Gillies) and home runs. Unlike teammates Gillies and Alex Liddi, he did not make Baseball America's list of the top 20 Cal League prospects.

Peguero opened 2010 with the West Tenn Diamond Jaxx and the big Dominican continued to swing a big bat, producing at a .298/.388/.520 rate with 15 homers and 61 runs in his first 72 games, though the guy with the large strike zone also had 89 strikeouts. He was named to the World team for the 2010 Futures Game, joining another Peguero, Francisco Peguero. He cooled off as the year went on. For the season, he hit .254/.340/.463 with 23 homers and 73 RBI in 130 games. He led the Southern League in home runs but also with 178 strikeouts and 10 outfield errors (tied with Denis Phipps). He failed to make the SL All-Star team or the Baseball America list of the SL's top 20 prospects. He was third in all of minor league baseball in Ks, behind Denny Almonte and Brandon Waring.

Peguero took over in right field for Ichiro Suzuki in his major league debut with the Mariners on April 19, 2011, playing the last inning of a blowout win over the Detroit Tigers. He went 0 for 4 as a starter in left field the next day.