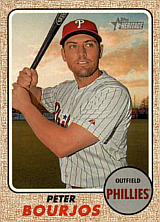 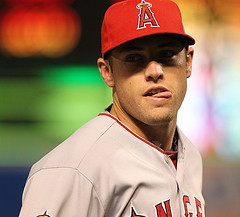 Peter Bourjos reached the bigs in 2010. He is the son of Chris Bourjos, the great-nephew of Otto Denning and his father is a cousin of Pat Denning.

Bourjos was picked by the Los Angeles Angels of Anaheim in the 10th round of the 2005 amateur draft. He was signed by scout John Gracio and made his pro debut with the 2006 Orem Owlz hitting .292/.354/.472. His 7 triples were one shy of the Pioneer League lead and he led the league's outfielders with 138 putouts. Baseball America rated him the circuit's #6 prospect, between Gerardo Parra and Drew Stubbs. Peter split 2007 between the Cedar Rapids Kernels (.274/.335/.426, 19 steals in 28 tries in 63 games) and the AZL Angels (5 for 16, walk, triple). In 2008, the 21-year-old played for the Rancho Cucamonga Quakes, batting .295/.326/.444 with 83 runs scored, 10 triples and 50 steals in 60 tries. Among Angels farmhands, only Andrew Romine had more swipes. He led the California League in steals and was second in three-baggers, one behind P.J. Phillips. Baseball America named him the best baserunner, best defensive outfielder and most exciting player in the league as well as the 17th-best prospect, between Sean Doolittle and Sean O'Sullivan. Bourjos put up a .281/.354/.423 line for the Arkansas Travelers with 14 triples and 32 steals in 44 attempts. He only made one error. He led the Texas League in triples and outfielder fielding percentage (.997). Baseball America named him the best defensive outfielder in the TL as well as the #9 prospect, between Trevor Reckling and Hank Conger. Overall, he tied Carlos Peguero, Tyson Gillies and Trent Oeltjen for third in the minor leagues in triples. That winter, the Angels added him to their 40-man roster.

Peter opened 2010 with the Salt Lake Buzz and batted .314/.364/.498 with 12 triples, 13 homers, 85 runs and 27 steals (caught five times) after 102 games. He was leading the Pacific Coast League in triples and runs scored when he was promoted to the major leagues. In his MLB debut, he hit 9th for the Angels and played center field. In his first at-bat, he flew out against Jeremy Guthrie, adding two more ground-outs versus Guthrie before the game was over. Overall, he played 41 games with the Angels that first season, batting .204 with 6 homers. He won the team's starting center field job in spring training of 2011, even though he had top prospect Mike Trout breathing down his neck, and in fact replacing him in the lineup when he went on the disabled list for a few days in midseason. His batting average was much improved in his first full season. He ended the year at .271/.327/.438 for a 116 OPS+ in 147 games, with a league-leading 11 triples (tied with Austin Jackson) along with 26 doubles and 12 homers. He stole 22 bases in 31 tries. His 7 assists tied Franklin Gutierrez for 4th among the 2011 AL center fielders while his 4 errors were third.

After that very good first full season, Bourjos took a step back in 2012. He kept his starting job in center field even though Trout, also an excellent defensive outfielder, was now playing regularly for the team and taking the AL by storm. He fell to .220/.291/.315 that year, with only 7 doubles, no triples and 3 home runs for a 72 OPS+ in 101 games. That year, he became one of only a handful of players to hit 10 more triples one year, only to manage zero the next, while playing at least 100 games both seasons. In 2013, injuries limited him to 55 games as a hamstring pull and a broken wrist cost him significant playing time. He did bounce back from his previous poor season, with a .274/.333/.377 batting line (102 OPS+), and 3 of each type of extra-base hit. On November 22nd, he was traded to the St. Louis Cardinals, along with prospect Randal Grichuk, in return for third baseman David Freese and pitcher Fernando Salas.

In his first season with the Cards in 2014, he played 119 games but hit only .231 with 4 homers and 24 RBI in 264 at-bats. He played more games in center field than anyone on the team, but logged fewer innings at the position than Jon Jay, as many of his appearances were as a late-inning defensive substitute. When the postseason rolled around, Jay got all the starts, with Peter making only one plate appearance in the Division Series and again in the NLCS. In 2015, following the tragic death of top prospect Oscar Taveras in the offseason and a severe decline in production by Jay, the way should have been open for Peter to wrest the starting job in center field again, but he was unable to do so as he hit only .200. Once again, his defensive prowess meant that he played a lot of games in center, but a large portion of his appearances were for late-game defensive purposes, as he logged only 195 at-bats in 117 games. He did have more innings than anyone else at the position, but that was because Jay got most of the playing time early in the season, and rookies Randal Grichuk and Tommy Pham took over late in the year, with all four making between 29 and 49 starts. Bourjos did not play at all in the postseason and was placed on waivers after the season. On December 2nd, he was claimed by the Philadelphia Phillies, where he was expected to be the team's fourth outfielder in 2016. He ended up being the team's regular in right field, where he started 92 games and appeared in 115 games overall. He hit .251 with 20 doubles, 7 triples and 5 homers, an improvement over his previous two seasons, but still well below average (his OPS+ was only 80).

In January of 2017, Bourjos was signed as a free agent by the Chicago White Sox and went to spring training, but he failed to make the team and, on March 28th, was sent to the Tampa Bay Rays in return for future considerations. His batting line continued to suffer, batting .223 even with limited plate appearances in 100 games, and he became a free agent again, signing with the Chicago Cubs. The Cubs cut him loose at the end of spring training, with the Atlanta Braves bringing him aboard on a minor league pact shortly thereafter. He logged time in 36 games, batting .205, and was cut loose on July 2. He caught on with the San Francisco Giants, finishing the year in Triple A. A reunion with the Angels in 2019 was short-lived: after batting .091 in 26 games, he was released in May. He joined the Colorado Rockies organization as an advance scout for 2020.