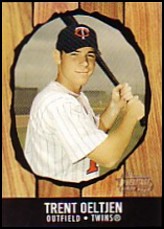 Trent Carl Wayne Oeltjen
(The Thunder from Down Under)

Trent Oeltjen spent parts of three seasons in the majors. He has also played in Australia, Mexico and Italy.

At age 22, the outfielder hit .287/.369/.396 in a return engagement with Fort Myers and was hit by another 20 pitches. He batted .235/.278/.471 for Australia in the 2005 Baseball World Cup. He also played for Australia in the 2006 World Baseball Classic and went 0 for 6 with three strikeouts and a walk. Leading off for the World team in the 2006 Futures Game, he was 0 for 2. He batted .299/.378/.411 for the New Britain Rock Cats that year, with 10 triples and 23 steals in 34 attempts. He was 4 triples behind Eastern League leader Vic Buttler and finished third in batting average behind Michel Abreu and fellow Aussie Brett Roneberg.

Oeltjen struggled in his AAA debut, hitting .238/.303/.340 for the 2007 Rochester Red Wings in 97 games and stealing 14 bases in 21 tries. In the 2007 Baseball World Cup, though, Oeltjen was one of the brightest stars. He hit .523/.580/.614 with 7 steals in 9 tries and 12 runs in 10 games. He led the tournament in average, runs and stolen bases. He joined Frederich Cepeda and Colby Rasmus in the Cup All-Star outfield. He drove in Brad Harman in the 7th inning against the Cuban national team for a 2-1 lead before Cuba rallied to win in the 10th. He scored one, drove in two and was a homer short of a cycle in a 4-3 win over the Dutch national team. He scored three runs in a 7-6 win over Team Canada. Oeltjen was involved in a dispute with members of the Mexican national team. Taking offense after being hit by a David Dominguez pitch, Oeltjen stole second despite a nice Australian lead late in the game. After he was picked off, the Mexican fielders and Oeltjen began to argue and both benches cleared to join the conflict. It was the lone dark spot in an excellent tournament for the center fielder.

Trent moved to the Arizona Diamondbacks system for 2008 and hit .317/.357/.466 with 10 triples and 15 steals (in 22 tries) for the Tucson Sidewinders. He had 10 outfield assists. He just missed the top 10 in the Pacific Coast League in batting average and tied Nate Schierholtz and Andres Torres for second in triples, 3 behind Tim Raines Jr.

Oeltjen was with Australia for the 2009 World Baseball Classic and remained one of their top performers. He went 6 for 12 with a double, RBI, walk and 2 steals in 2 tries. He led the team in hits and was second to Brett Roneberg in average. He was especially sharp against the Mexican national team, getting 4 hits in 5 AB; he had two hits off Oliver Perez and one off both Francisco Campos and David Cortes.

Trent Oeltjen was called up to the majors August 6, 2009 when Justin Upton was injured. That night, Oeltjen recorded his first major league hit against Pittsburgh Pirates pitcher Kevin Hart. Oeltjen then proceeded to steal his first major league base. He added a home run later in the day to finish 2-for-6 in his big league debut. In his first five major league games, Oeltjen was 12 for 24 with 3 home runs and 25 total bases. He had six runs in that span. He finished at .243/.250/.457 in 24 games for the Diamondbacks.

Oeltjen announced his retirement from baseball on January 21, 2015. He came out of retirement to play for Australia in the 2017 World Baseball Classic Qualifiers. He certainly did not look rusty, going 5 for 9 with four doubles, three runs and five RBI in three games. He was among the Sydney Qualifier leaders in average (3rd behind Eric Farris and Keegan Swanepoel), tied for 4th in runs, tied for 4th in hits, first in doubles (one over Logan Wade), 3rd in RBI (behind Boss Moanaroa and Kyle Botha), tied Botha for the most total bases (9), 3rd in OBP (behind Anthony Phillips and Farris), led in slugging (.125 over Farris) and led in OPS (115 over Farris). In the finale against South Africa with a spot in the 2017 World Baseball Classic at stake, he went 3 for 4 with a walk, two runs and two RBI in a 12-5 win. Down 1-0 in the first, he doubled off Kyle Gaddin to score Mitch Dening with the tying run. Down 4-3 in the 6th, he doubled off Carl Michaels and came home on a Trent D'Antonio double to tie it. He was then part of their insurance run explosion in the 8th.

Having contributed mightily to Australia's qualification, he also participated in the 2017 World Baseball Classic, being one of the few players to have played in the first edition to also do so in the fourth.