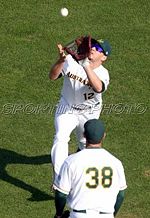 Brad Harman played briefly in the majors with the Philadelphia Phillies in 2008. Harman has played for the Australian national team from 2005-2016.

Harman was signed by scout Kevin Hooker and debuted professionally in 2004 with the GCL Phillies. He hit .230/.281/.317 but led Gulf Coast League shortstops with a .928 fielding percentage. In one game for the Clearwater Threshers, he walked and scored but got no at-bats. That year, Harman also played for the Australian junior national team.

Harman starred in the 2005 Claxton Shield, winning both the Gold Glove Award and Helms Award as the MVP of the tournament while leading New South Wales to the title.

Brad was the top star on the Australian entry in the 2006 World Baseball Classic. He went 0 for 2 with a throwing error in a 10-0 loss to Italy in which Australia was one-hit. In his team's second game, Harman was 1 for 3 and was caught stealing in a 2-0 loss to Venezuela. In the third game, though, Brad went 2 for 2 with a RBI double in a 6-4 loss to the Dominican Republic. Overall, his 3 hits led an Australian team with four former major leaguers and his 1.000 OPS also led the squad.

Harman was again on the Claxton Shield champs in 2007, with the Victoria Aces. He went 3 for 8 in their final two games.

In 2007, Harman hit .281/.341/.449 for Clearwater with 13 home runs. He tied for 13th in the Florida State League in homers. In the 2007 Baseball World Cup, he batted .275/.383/.375 and scored 11 runs in 10 games for Australia. He was one run behind the tourney leader, teammate Trent Oeltjen. Harman scored the 7th-inning go-ahead run against the Cuban national team in a game Australia lost 3-2 in 10 innings; Brad also turned several fine defensive plays in that contest. Harman sparked the winning rally in the bottom of the 9th against the Dutch national team closer Michiel van Kampen. Against Team Canada, Harman doubled in Luke Hughes with the go-ahead run in the 9th inning.

Right after the Cup ended, the Phillies added Harman to their 40-man roster. He started with the Reading Phillies in 2008 and hit .222/.311/.333 but was called up to the majors when Jimmy Rollins got hurt. On April 22nd, he debuted as a pinch-hitter for Ryan Madson with two outs in the 9th, a 8-6 lead and a man on third against the Colorado Rockies. Facing Manuel Corpas, Harman hit a weak pop-up to Troy Tulowitzki. Harman was just 1 for 10 with a walk and a double for the Phillies. His lone MLB hit came off Zach Duke. He returned to Reading, where his final line was only .210/.280/.366, albeit with 17 homers.

In the 2009 World Baseball Classic, Harman went 3 for 9 with a walk, RBI and 4 runs as the Australian shortstop. He led the team in runs scored ans was third in OBP behind Brett Roneberg and Trent Oeltjen. All four of his runs came in Australia's 17-7 romp over Mexico. He struggled more with Reading in 2009 (.201/.271/.310) and was let go by the Phillies.

Harman hit .241/.333/.362 as Australia's second baseman in the 2009 Baseball World Cup, fielding .974, with 9 runs in 15 games (James Beresford was now the Aussie shortstop). His biggest hit was a three-run homer off Rafael Diaz of Mexico to start a comeback from a 3-0 deficit in the 5th. Australia finished 5th, their best finish ever in a Baseball World Cup.

In 2012-2013, he fell to .260/.333/.420 and tied for 7th in home runs (6). He struggled with most of Australia in the 2013 World Baseball Classic, going 1 for 10. His lone hit was off Leon Boyd and drove in Stefan Welch in a loss to the Dutch national team; it was one of just two runs for Australia in their three games. He had a long drive to the wall off Loek van Mil with Australia down 4-1 in the 9th against the Netherlands and two aboard but Randolph Oduber made a crucial catch at the wall.

Harman was once again Australia's second baseman in the 2017 World Baseball Classic Qualifiers, in February 2016. He hit .200/.367/.500 with 3 runs and two RBI in three games. His three walks tied for third in the event, behind Anthony Phillips and Jonathan Phillips and he tied for 5th in runs. He scored Australia's first run, reaching on a force in the first of the opener against the Philippines national team and coming around on a Welch hit. In the finale, with a spot in the 2017 World Baseball Classic at stake, he came up with a 1-1 tie in the bottom of the 5th and took South Africa's Carl Michaels deep; Allan de San Miguel followed with another homer as Australia went on to win.