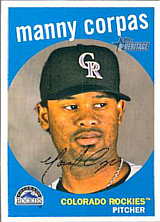 Manny Corpas was a workhorse reliever in parts of seven seasons, mainly with the Colorado Rockies.

Corpas was signed by scout Tim Ireland in 1999 and pitched briefly for Venoco (VSL) in 2000 and the DSL Rockies in 2001. Debuting in 2006 and on to 2008, he appeared in 189 major league games, coupled with 42 games in the minors in 2006 (and an ERA of 0.98 split between two teams). Corpas pitched in the 2007 World Series, giving up no runs in two games, having replaced Brian Fuentes as the Rockies' closer down the stretch during their remarkable late season run that propelled them into the postseason. He saved 19 games that year, with a 2.08 ERA, the lowest relief ERA in Rockies' history. He saved all three of the Rockies' wins against the Philadelphia Phillies in the NLDS, then added a pair of saves as Colorado swept the Arizona Diamondbacks in the 2007 NLCS. He promptly lost the closer's job when he posted a 4.52 ERA with nine blown saves in 2008.