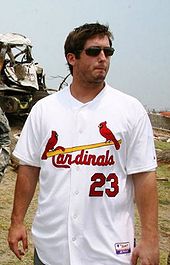 David Freese made his professional debut in 2006 and was traded for an All-Star a year later. By 2009, he was in the major leagues.

Freese hit .373/.443/.525 with 52 runs in 56 games in 2005 as a junior for South Alabama, after transferring from junior college. He was 7th in the Sun Belt Conference in average and led the school one year after Adam Lind had done so. Freese was even better in 2006, hitting .414/.503/.661 with 73 runs and 73 RBI in 60 games. He barely won the SBC batting title and also led the Conference in RBI. He tied for 9th in NCAA Division I in RBI, was 12th in average and just missed the top 10 in runs scored. He made the All-Conference team at third base and was named SBC Player of the Year. He was picked as a American Baseball Coaches Association All-American as the top third baseman in NCAA Division I, ahead of Evan Longoria and Pedro Alvarez, among others.

After the season, he was traded with about $1 million to the St. Louis Cardinals for Jim Edmonds.

Freese batted .306/.361/.550 for the 2008 Memphis Redbirds with 26 home runs and 91 RBI. He led Pacific Coast League third basemen in fielding percentage (.967) and double plays (26). He made his major league debut with the St. Louis Cardinals on opening day of the 2009 season. He only played 17 games in the majors that first season, in spite of hitting .323 in 21 at-bats; he missed more than half of the year with injuries, and was with Memphis for 56 games, hitting an even .300. In 2010, he was in the majors for 70 games after one game in AA, and hit .296 with 4 homers and 36 RBI before his season was ended by a right ankle injury in June. In 2011, he started well, hitting .256 with 2 homers and 14 RBI in 25 games before injuries caught up with him once again. He broke a bone in his left hand, underwent surgery on May 3rd, and was again out of action for a long stretch. But when he came back, he had a storybook ending to his year. He finished the season with a batting line of .297/.350/.441, with 10 homers and 55 RBI in 97 games. But the best was yet to come; in the Cardinals' unlikely run to a World Series title, Freese was one of the main heroes. He set a record with 21 RBI during the postseason, and was named MVP of both the NLCS and World Series; he was at his best in the critical Game 6 of the World Series, hitting a game-tying two-run triple with two outs in the 9th inning, and then winning the game with a walk-off home run in the 11th inning.

Freese picked right where he left off in 2012, driving in the first two runs in the history of Marlins Park with a 1st-inning single off Josh Johnson of the Miami Marlins on April 4th, sending the Cardinals on their way to a 4-1 win. He was chosen as the "Final Man" for the National League on the All-Star Game roster. In July, he hit .458, the highest monthly average by a Cardinals player since Chick Hafey hit .462 in July of 1928. He finished the season with a batting line of .293/.372/.467 in 144 games, producing over a full season at the pace he had shown in abbreviated season the two preceding years. With 25 doubles, 20 homers, and 79 RBI in addition to solid defense at the hot corner, it made him a very valuable member of the team. He remained hot early in the postseason and was 38 for 100 to begin his postseason career, a new MLB record for hits in someone's first 100 at-bats in that stage. He was hitless but drove in a run with a sacrifice fly in the Cardinals' win over the Atlanta Braves in the Wild Card Game, went 8 for 19 (.421) with 3 doubles in the NLDS as the Cards defeated the Washington Nationals, then hit only .192 but with a pair of doubles and a homer when St. Louis bowed out against the San Francisco Giants in the NLCS. After the season, he gave his team a scare when he crashed his SUV into a tree after he swerved to avoid hitting a deer on a road in Missouri on Thanksgiving, November 22nd. He had had a couple of alcohol-related mishaps in the past, including an arrest on suspicion of DUI in 2009, and the foot injury that cost him part of the 2009 season which occurred after his vehicle slipped on a patch of ice. Freese was not injured in his latest accident, and there was no indication that alcohol was involved in any manner.

Freese had a disappointing season in 2013, even though he was healthy and played 138 games as the Cards' regular third baseman. His batting average fell to .262 (with a .342 OBP and .381 slugging for a mediocre 101 OPS+), his homers to 9 and his RBIs to 60 even though he was hitting in the middle of one of the most productive line-ups in the majors. He ground into 25 double plays, tying Paul Goldschmidt for third in the 2013 NL. He continued to under-perform in the postseason, hitting .188 in the NLDS against the Pittsburgh Pirates, .190 in the NLCS against the Los Angeles Dodgers and .158 in the World Series where the Cardinals lost to the Boston Red Sox. In 17 games, he hit only one homer and had a mere 4 RBIs. On November 22nd, he was traded to the Los Angeles Angels of Anaheim along with P Fernando Salas in return for OFs Peter Bourjos and Randal Grichuk.

Freese played two seasons with the Angels. In 2014, he played 134 games during which he hit .260 with 10 homers and 55 RBIs. The Angels won a division title that year, but in the Division Series, they were surprisingly swept by the Kansas City Royals in three games. David went 1 for 8, with his lone hit a home run off Jason Vargas in a losing cause in Game 1 on October 2nd. In 2015, he played 121 games with 14 homers and 56 RBIs. Both years, he had an above-average OPS+, at 104 and 109 respectively. In spite of those good results, he was unable to find a team to hire him when he became a free agent after the 2015 season, waiting until March 11, 2016 to find a taker in the Pittsburgh Pirates. He signed a one-year deal for $3 million, largely to serve as an insurance policy until Jung-ho Kang was fully recovered from knee surgery.

Freese had some solid seasons with Pittsburgh, as he played 141 games in 2016 and hit .270 with 13 homers and 55 RBIs. He played another 130 games in 2017 and hit .263 with 10 homers and 52 RBIs. He split time between third and first base the first year and was the regular third baseman the second. Following the season, the Pirates acquired prospect Colin Moran in a trade and he took over the bulk of the playing time at third in 2018, with Freese relegated to a back-up role at the two infield corners. He played 94 games, hitting .282 with 9 homers and 42 RBIs, which actually resulted in the highest OPS+ for him of his three seasons with the Bucs. Moran was clearly the long-term option, however, so on August 31st, he was traded to the Los Angeles Dodgers for a rookie-class infielder, Jesus Manuel Valdez. This allowed him to join a contender for the last mkonth of the pennant race.

He announced his retirement following his participation in the 2019 Division Series.