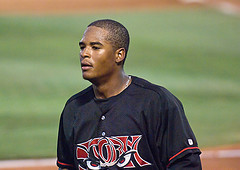 Cedric Hunter began his professional baseball career by winning a MVP award. He made his major league debut on Opening Day in 2011.

Hunter hit .580 and slugged 1.290 as a high school senior. He scored 49 runs and stole 20 bases in 69 AB, while blasting 12 homers. Baseball America named him first-team All-American in the outfield, alongside Travis Snider and Chris Parmelee. Cedric was picked by the San Diego Padres in the third round of the 2006 amateur draft, the 93rd pick overall, between Cole Gillespie and Joe Smith. He was signed by scout Pete DeYoung for a $415,000 bonus.

Making his pro debut with the AZL Padres, Hunter hit .371/.467/.484 with 40 walks to 22 strikeouts in 52 games, 46 runs, 44 RBI and 17 steals in 22 tries. He led the Arizona League in runs (tied with Nick Van Stratten), hits (79), average and total bases (103), tied for second in walks and was second in OBP (.003 behind Luis Durango). He was 4 for 15 after a late-season promotion to the Eugene Emeralds. He formed an all-prospect outfield with Durango (rated #13 in the AZL by Baseball America) and Kyler Burke (ranked #8). He was named to the league's All-Star outfield alongside Durango and Carlos Peguero and took home MVP honors. Baseball America rated him as the AZL's #3 prospect behind Hank Conger and Jeremy Jeffress and as San Diego's #1 prospect.

Cedric continued to entertain in the field in 2007 but fell to a more human .282/.344/.373 with 8 steals in 17 tries and 47 walks to 78 strikeouts for the Fort Wayne Wizards. Baseball America did not rate him as one of the top 20 prospects in the Midwest League. The Georgian also got a brief look with the Portland Beavers, going two for four with a walk, homer and three RBI.

Hunter rebounded with the 2008 Lake Elsinore Storm, producing at a .318/.362/.442 rate with 98 runs, 33 doubles, 84 RBI and only 47 strikeouts in 584 AB. He led Padres farmhands in runs, hits and total bases (258), was the hardest batter in the California League to strikeout and also paced the Cal League's outfielders with 319 putouts. He was second in the circuit in runs (3 behind Chris Carter) and total bases (30 behind Carter) while placing third in average behind Daniel Nava and Carlos Santana. He led all of minor league baseball with 186 hits, five ahead of Matt Miller. Baseball America ranked Hunter as the California League's #10 prospect, between Henry Rodriguez and Julio Borbon and as San Diego's 6th-best prospect. He joined Kellen Kulbacki and Josh Reddick as the loop's All-Star outfielders.

Starting 2010 back with San Antonio, the 22-year-old batted .308/.375/.423 in his first 71 games, then was promoted to Portland. On August 26, he set a franchise record with 8 RBI in a game, collecting five hits (including two homers) and falling a triple shy of the cycle. It was especially odd as he had just three long balls after 57 games at AAA.

After his solid performance in 2010, Hunter made the Padres' opening day roster in 2011. In the team's first game of the season on March 31st, he came in as a pinch-runner for Cameron Maybin in the 11th inning against the St. Louis Cardinals; he came in to score an insurance run on a single by Nick Hundley and played in center field for the bottom of the 11th as the Padres won, 5-3. However, after only 6 games, during which he went 1 for 4, he was sent down to the minor leagues. It would take him a full five years to return to the Show. He spent the remainder of that season with the AAA Tucson Padres, hitting .255 in 81 games.

He changed organizations again before the 2016 season, signing as a minor league free agent with the Philadelphia Phillies and receiving an invitation to spring training. He was expected to play in AAA again, but thanks to a strong spring training and an injury to prospective RF Aaron Altherr, he not only made the team's Opening Day roster, but was penciled in to start in Altherr's spot at least for the first weeks of the season.