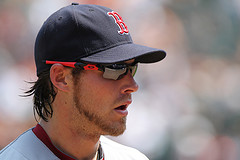 Josh Reddick got his first shot at playing regularly in the majors in mid-year 2011, two years after making his debut, when J.D. Drew went on the disabled list for the Boston Red Sox.

Reddick was a 17th round draft choice by the Red Sox in the 2006 amateur draft, out of a junior college in his native Georgia. He was signed by scout Rob English and had a good start to his professional career in 2007, hitting .306 with 17 doubles, 6 triples and 18 homers for the Greenville Drive in the South Atlantic League, excellent production for a 20-year-old player with no previous professional or college experience. He also was called up to the AA Portland Sea Dogs for one game, going 0 for 1. In 2008, in spite of his success the previous year, he was back at Greenville to start the season, but he was so hot that the Red Sox had no choice but to promote him. He hit .340 in 14 games to earn a ticket to the Lancaster JetHawks of the California League. There, he took full advantage of the hitter-friendly environment to put up an eye-popping line of .343/.375/.593 in 76 games, during which he hit 17 long balls. He was named to the league's post-season all-star team, but was not yet finished as he moved up to Portland to finish the year. There, he hit only .214, but with 6 homers in 34 games. Between the three levels, he had hit .311 in 124 games, with 19 doubles, 12 triples and 23 homers, while stealing 14 bases in 17 attempts.

Now on the fast track to Boston, Josh began 2009 back in Portland. He played 63 games for the Sea Dogs, hitting .277 with 17 doubles and 13 homers before being called up to "the Show" in late July. He made his major league debut for the Red Sox on July 31st, making an out as a pinch-hitter. He then started a game in all three outfield spots from August 1-4, hitting 3 doubles and a homer during the stretch. His first homer came off the Baltimore Orioles' Brian Bass on August 2nd. However, he was just there to fill in for injured teammates, and soon was back in the minors, now playing for the AAA Pawtucket Red Sox. He hit only .127 in 18 games for Pawtucket, in a stint interrupted by another call-up to Boston. In the majors, he hit .169 in 27 games. After the season, Baseball America ranked him at #75 in its top-100 prospect list.

Reddick had a full season in AAA in 2010, playing in 114 games for Pawtucket, where he hit .266 with 28 doubles and 18 homers. He was twice the International League Player of the week although he did not make the circuit's All-Star team. As had been the case the previous year, he also spent some time in Boston in mid-summer as an injury replacement, but hit only .194 in 29 games. He was back in Pawtucket to start 2011. He was hitting only .230, but with 9 doubles and 13 homers in 52 games when J.D. Drew went down with an injury. This time, when Reddick was called up to Boston, it was to stay. He replaced Drew in right field and played very well, hitting over .300 in his first month on the job. He then cooled down and settled for a .280 average in 87 games with 7 homers and 28 RBI. He was named to the 2011 Topps All-Star Rookie Team after the season. On December 29th, the Red Sox sent him, along with minor leaguers Raul Alcantara and Miles Head, to the Oakland Athletics in return for P Andrew Bailey and OF Ryan Sweeney.

Playing regularly in right field for the surprisingly competitve A's in 2012, Reddick made two highlight reel catches in the span of a few days as the A's were powering through a 12-2 stretch in July. On July 25th, he robbed the Toronto Blue Jays' Travis Snider of extra bases by making a "Spiderman catch", climbing the fence at the Rogers Centre, then holding to the mesh with his right hand for a couple of seconds, a couple of feet above the ground, to catch the ball off the top of the fence. On July 27th, he leapt and crashed against the wall to make a game-ending catch against Nick Markakis of the Baltimore Orioles at Camden Yards, staying down on the field and having to be carted off. However, in spite of the force of the blow, he did not suffer a concussion, but did have back contusion. He hit only .242, but compensated for his low batting average with outstanding power - 29 doubles, 5 triples and 32 homers. He scored 85 runs and drive in as many and was the recipient of a Gold Glove for his defensive play. In the postseason, he was only 2 for 17 as the A's lost the ALDS to the Detroit Tigers in 5 games, although one of the two hits was a homer.

Josh went on a season-long power drought in 2013, coupled with a further drop in batting average. He was hitting a mere .202 with 5 homers in 82 games when he had breakout game on August 9th, connecting for three consecutive homers in a 14-6 win over the Blue Jays. The homers came off three different pitchers, starter Esmil Rogers and relievers Neil Wagner and Juan Perez. He then added two more homers in a 5-4 loss to the Jays the next day, doubling his season's total in 48 hours. In 114 games, he hit only .226 with 12 homers and 56 RBIs. He did hit a double and a homer as the A's were defeated by the Detroit Tigers in the Division Series. Injuries messed with his 2014 season, as he played only 109 games, hitting .264 with 12 homers and 54 RBIs. In the Wild Card Game, he went 2 for 4 with a pair of walks and scored twice, but the A's lost a wild extra-inning game at the hands of the Kansas City Royals.

In 2015, Josh was healthy all year, getting into 149 games, but the A's had a bad year, sinking to the bottom of the AL West standings. He hit .272 with 22 doubles and 20 homers as one of the most productive players on the team. On May 19, 2016, Reddick broke his thumb on a stolen base attempt, putting him out of action for a month. He was off to an excellent start, hitting .322 in 42 games and had hit his 5th homer of the year just before suffering the thumb injury. He returned on June 28th and was immediately the subject of trade rumors, as the A's were once again heading nowhere. After 68 games, he was hitting .296 with 8 homers and 28 RBIs when he was traded to the Los Angeles Dodgers along with veteran P Rich Hill in return for three prospects: Jharel Cotton, Grant Holmes and Frankie Montas. A first consequence of the trade was that the Dodgers sent RF Yasiel Puig down to the minors to make room for Josh. After 17 games with L.A., he was hitting only .152 then added his name to the list of players having suffered bizarre injuries. In his case, he had ordered room service at his hotel when he hurt his finger holding the door open for the delivery. "I’m at rock bottom right now. But I will climb out," he commented stoically. he ended up hitting .258 in 47 games for L.A., but with only 2 homers and 9 RBIs. He hit better in the postseason, going a combined 8 for 26 (.308), although with no extra-base hits. On November 17th, he signed a free agent contract with the Houston Astros for four years and $52 million.

Reddick had an excellent first season with Houston, hitting .314 - 5th best in the American League - in 134 games, with 34 doubles, 13 homers and 82 RBIs as the team's regular right fielder. He was part of an offence that was dangerous from top to bottom, and he hit in various slots of the order, but usually second or seventh or below. He had an excellent Division Series against the Boston Red Sox, going 6 for 16 with 3 runs scored, but struggled in the ALCS, as he started off 0 for 22 before finally getting a hit in Game & against the New York Yankees. In spite of his lack of offensive contribution, the Astros made it to the World Series, where they faced his former team, the Dodgers.

In October 2017, Reddick donated $1 million towards the construction of a state of the art youth baseball field in Effingham County, GA, in the area where he grew up. The field, which was expected to be ready for the spring of 2018, was remarkable in that it was built to be fully accessible to players with special needs, particularly those needing wheelchair access. On March 24, 2014, he was placed on the disabled list with a leg infection that seemed to be the result of a spider bite.