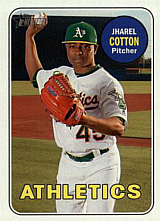 Jharel Cotton made 29 starts for the Oakland Athletics over two seasons. He blew out his arm in 2018 and eventually came back to the majors with the Texas Rangers in 2021. His brother is Jamaine Cotton.

On August 1st, Cotton was traded to Oakland along with fellow prospects Grant Holmes and Frankie Montas for two established major leaguers, pitcher Rich Hill and outfielder Josh Reddick. He quickly showed his new organization how good he was. On August 9th, he came within one out of pitching a perfect game. Now with the Nashville Sounds, he retired the first 26 Round Rock Express batters he faced before journeyman Doug Bernier tripled to right field with two outs in the 9th. His 26th out had been a strikeout of Kyle Kubitza, which the latter had protested, earning an ejection and causing a significant delay. Cotton struck out the next batter to seal the 3-0 shutout. He was called up to Oakland when rosters expanded in September and made his debut on September 7th, starting against the Los Angeles Angels. In 6 1/3 innings, he gave up a run on only 2 hits, one of them a solo homer by C.J. Cron to lead off the 7th, and received credit for a 4-1 win. He went 2-0, 2.15 in 5 starts. In 2017, he spent the majority of the season in the majors, making 24 starts, going 9-10, 5.58 while pitching 129 innings and striking out 105 batters. He also made 4 appearances for Nashville, going 3-0, 2.95. Despite the high ERA, he was considered a future ace, but he suffered a setback in spring training in 2018 as he went down with an elbow injury that was quickly diagnosed as a tear, necessitating Tommy John surgery and forcing him to miss the entire season. He spent 2019 in the minors, undergoing hamstring surgery while spending time at several levels. The A's sent him to the Chicago Cubs in November.